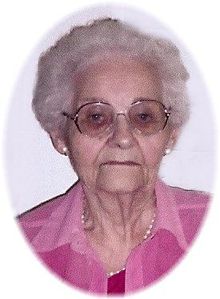 Ada Belle Owens, formerly of Osakis, MN, died on March 1, 2015 at the Littlefork Care Center in Littlefork, Minnesota. She was born on July 15, 1917 in Motley, MN to Albert and Susanna (Senti) Williams.

Ada graduated valedictorian of her class from Motley High School in 1936, and then completed teacher's college at Pine River Normal School, where she was certified as a country school teacher.

Ada married the love of her life, Hugh J. Owens on March 12, 1938 at the Free Methodist Parsonage in Old Hartford Township, near Motley, MN. They moved to Osakis, MN where, in the early years, Ada taught country school. She was always very proud of being a teacher and fondly remembered her students throughout the years. Ada and Hugh first farmed and grazed cattle on the land that is now Battle Point Park on East Lake Osakis, and then in 1949 moved to "the farm on the hill" in North Gordon Township, where they farmed and raised their three children, David, Susan, and Deborah. When their barn burned in 1967, they made the decision to expand in grain and dairy farming, and moved a few miles down the road to the "corner farm on the lake" where they continued farming and remained after their retirement.

Ada was a devoted farm wife, mother, grandmother, and community member. She milked cows for over 40 years, ran her household with a strong business mind, and never sat down to rest, except to read the newspaper. She loved to cook and bake and could easily feed a crowd at a moment's notice. Throughout the years, she was active as a 4-H leader, Gordon Community Club member, the Gordon Pleasant Hill Cemetery Association, and a longtime member of the United Methodist Church of Osakis. In the early years she raised chickens and her "egg money" helped to support the family. She also raised and picked cucumbers by the thousands. She hummed as she worked, and loved music. She played the piano and organ, and her prize possession was the violin that was handed down to her from her father. Having been raised in the depression, she was vigilant in reminding her children and grandchildren to always "turn out the lights" and loved to pick up a good bargain at a rummage sale. Although she never fished or went out on the lake, she was the one that cleaned the fish and taught the skill to her grandsons. She treasured family and friends and welcomed all visitors to her home. No one left without a cup of coffee and a hearty lunch.

Services will be held on Thursday, March 5, 2015 at 2:00 pm at the Roy-Hetland Funeral Home Chapel in Osakis with Pastor Alice Tobler officiating. Visitation will begin one hour prior to the service. Interment is at the Gordon Pleasant Hill Cemetery in Osakis, MN. Active pallbearers are her grandsons. Honorary pallbearers are Dan Klukken, Jesse Johnson, Louis Gray, Dennis and Ron Traulich, Todd Owen, Dale Massman and Frank Nelson.

To order memorial trees or send flowers to the family in memory of Ada Owens, please visit our flower store.