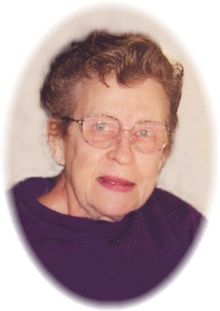 Life History for Alaine Olson
Alaine E. 'Lannie' (Mrs. Maynard 'Ole') Olson, age 80 of Osakis, formerly of Garfield, passed away unexpectedly and peacefully on Thursday, January 5 at her apartment in Osakis, MN.
Alaine was born on December 19, 1931 in Gordon Township, Todd County, MN. She was confirmed at Osakis Lutheran Church on June 9, 1946. She graduated from Osakis High School with the class of 1950. She then moved to Minneapolis and waitressed at the Toddle House. She was hired by Ed Phillips & Sons, working as a bookkeeper. She also worked as a policy comparer for a life insurance company. Another job she had was as a flower arranger for Minneapolis Floral. She returned to the Alexandria area and worked as a waitress for Traveler's Inn. She married Maynard 'Ole' Olson on June 18, 1955 in Alexandria, MN. For a time Lannie worked in the collections department for Industrial Credit and then the Olson's bought a resort on Lake Mina called 'Ole's Resort' and operated that for thirteen years. In 1977 they moved to Garfield and continued a new business called Carpole's, which processed rough fish into fertilizer. It changed names from Carpole's to Minntralia, Sunrane and finally Greenworld. Lannie did the payroll and bookkeeping for the business, retiring in 1992. She supported the Viking Sportsman's Club and many other conservation efforts, including Operation Walleye.
Lannie enjoyed gardening and canning. She also liked to go fishing and loved animals. A favorite past time of hers was feeding and watching the birds and squirrels. Alaine also enjoyed a good game of cards and socializing. She remained active even in her retirement and would ride her stationary bike two miles a day. As a kind and nurturing person, Alaine was always positive and kept a happy outlook. One of her favorite sayings was "Thank you God, it's going to be a good day." A sentiment she used for herself was "She didn't miss much, and what she did miss, she didn't miss."
Alaine is survived by her daughter, Diane L. Olson of Burnsville; brothers, Michael (Sheryl) Robinson and Thad Robinson, a sister, Sue (Leo) Stoetzel, all of Osakis; brothers-in-law, Paul (Arlene) Olson of Nelson and Curtis (Esther) Olson of Loveland, CO; grandchildren by love, Jason & Carrie Mounsdon and great, grandchildren by love, Riley & Averie Mounsdon; many nieces and nephews. There are many close friends that also called Alaine "Mom" and "Grandma."
Preceding her in death are her parents, her husband, Maynard 'Ole' Olson in 2002; a sister, Gail Fiskness; 2 brothers, Gary & Jon Robinson; niece, Tanya Stoetzel.
A memorial service is scheduled for Tuesday, Jan. 10, 2012 at 11:00 am at the Osakis Lutheran Church with Rev. Ron Calvert officiating. Musicians: Colleen and Robert Anderson, Robin Backlund and Pat Converse. Interment at the Kinkead Cemetery in Alexandria with pallbearers Chris and Damon Stoetzel, Chane Robinson, Ken and Mike Olson, Jay Backlund.

To order memorial trees or send flowers to the family in memory of Alaine Olson, please visit our flower store.