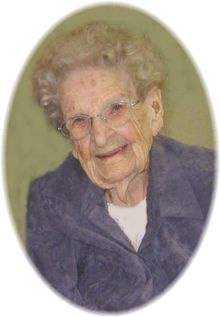 Alice Eidem, age 102 of Osakis, formerly of Glenwood, passed away on Thursday, Feb. 14 at the Community Memorial Home in Osakis, MN.
On January 27, 1911 a baby girl was born to Emil and Elizabeth Pearson in Sweden. As a young child, Alice traveled across the Atlantic on the famous sailing ship, Lusitania to a new life in the United States. She graduated from Lanyon High School in Lanyon, Iowa. While living in Minneapolis, Alice met and married Conrad Eidem on June 9, 1934. They were members of the Nokomis Heights Lutheran Church in Minneapolis where Alice was very active in various ministries. After retiring, the Eidem's moved to a home on Big Sauk Lake in Sauk Centre and then after a few years resettled in Glenwood, MN. In 2003 they moved to Osakis where she remained until her passing.
Alice had many interests including knitting afghans for all of her family members and making dish cloths which were sent to missions all across the globe. She also enjoyed going out on the lake fishing, cheering for the Minnesota Twins each season and travelling. Over the years she had taken trips back to her homeland of Sweden, to Alaska and various parts of Canada and the U.S. She was a loving, gentle mother and grandma who was very proud of her grandchildren and eleven great grandchildren.
Survivors include her son and daughter-in-law, Charles and Sandra Eidem of Bloomington; a daughter-in-law, Marilyn Eidem of Bloomington; 7 grandchildren, Sher, Jeffrey, Jon, David, James, Susan and Joel; 11 great grandchildren; many nieces and nephews.
She is preceded in death by her parents, her husband, Conrad and a son, Richard, both passing in 2008; 7 brothers and sisters.
A memorial service celebrating her long life will be held on Friday, February 22, 2013 at 2:00 pm at the Galeon Terrace Heights Chapel in Osakis, MN with Rev. Eileen Mehl. Soloist is Dana Hetland. Interment is at the Pleasant View Memorial Gardens in Burnsville, MN next to her husband, Conrad. Arrangements by Roy-Hetland Funeral Home,Osakis, MN.

To order memorial trees or send flowers to the family in memory of Alice Eidem, please visit our flower store.