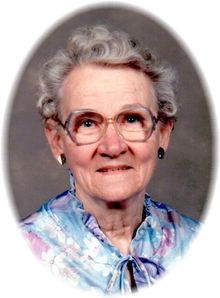 Life History for Alice Johnson
Alice Johnson, age 94 and lifetime resident of the Osakis area went to meet her Lord on the morning of June 4, 2014 from the Community Memorial Home in Osakis, MN.
On November 15, 1919 a baby girl was born to Louis A. and Martha (Olson) Larson in West Union Township, Todd Co. They named her Alice Mae and she grew up on the family farm, attended country school and then graduated with the Class of 1937 from Osakis High School. She married her best friend and sweetheart, William Johnson on April 2, 1939 at the age of twenty years. Alice and William farmed in Gordon Township, Todd County, MN.
Alice was an active member of the Salem Lutheran Church and assisted there in many capacities. She was both a Sunday School teacher and Superintendent, served on several church boards and also belonged to the Ladies Aide. When her husband, William died in 1959, it left Alice as a young widow. She continued to live on the farm and also worked as an activity assistant for ten years at the Community Memorial Home in Osakis. Later she found work as an aide at an assisted living facility in Alexandria, MN. In 1989, Alice took a trip to Norway to see the home of her ancestors. She had a wonderful time, met many people and many memories.
Alice was a gifted seamstress and was able to sew many types of clothes, quilts and do various mending projects. She also had a steady hand for doing beautiful embroidery work. Alice looked forward to the summer season so she could work out in her flower and vegetable garden. Doing genealogy research was another past time she enjoyed. Alice had many pets over the years, but especially loved her cats. She was a caring and active mother and grandma who greatly enjoyed spending time with her family and going to her grandchildren's many activities.
She is survived by her children, Ione (James) Johnson of Osakis, Dennis (Loretta) Johnson of Gilbert, AZ, John (Carol) Johnson and Kenneth (Linda) Johnson, all of Osakis, Eugene (Kay) Johnson of Rockville, MN; 17 grandchildren; 33 great grandchildren and 4 great great grandchildren; son-in-law, Jesse Johnson of Osakis; daughter-in-law, Ruby Johnson of Champlain, MN; many nieces and nephews, relatives and friends.
Alice is preceded in death by her parents, husband, William; a son, Wendell Johnson and a daughter, Sandra Johnson; her grandson, Jeremy Johnson; great grandson, Beau Johnson; 2 brothers, Andrew and Roy Larson; sisters, Esther Burton, Edna Quanbeck and an infant sister, Inez Luella Larson.
Funeral services for Alice will be held on Saturday, June 7, 2014 at 10:30 am at Salem Lutheran Church in rural Osakis with Rev. Steve Hilde and Rev. Allan Bjorklund officiating. Musicians are organist, Juanita Klukken and soloist, Nathan Larson. Interment is in the church cemetery with honorary bearers being all of her loving grandchildren, family and friends. Active bearers are Lee Christopherson, Jeffrey Greene, William Johnson, David Hiltner, Howard Haider, Michael Johnson, Paul Matthys, Blandon, Cort and Myron Johnson, Steve Welch.
Arrangements were with the Roy-Hetland Funeral Home in Osakis, MN.

To order memorial trees or send flowers to the family in memory of Alice Johnson, please visit our flower store.