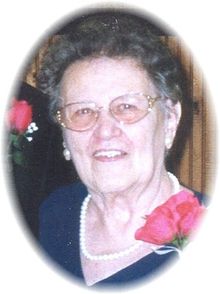 Alice Mensen, age 82 of Osakis, passed away early Monday morning, October 11, 2010 at the Community Memorial Home in Osakis where she was a resident.
Alice Irene Vortherms was born to parents, Joseph and Anna (Schlichte) Vortherms in Wilmont, MN on March 5, 1928. She was united in marriage to her sweetheart, Ray Mensen on September 17, 1946 in Wilmont, MN once he had returned from serving his country in WWII. They farmed in Adrian , Rosen and Hardwick before moving north to work farms in Sauk Centre, Long Prairie and finally making their retirement in West Union, MN. Alice was a member of St. Alexius and Immaculate Conception parishes and belonged to the Christian Mothers, the Helping Hands Society and the Osakis Senior Center.
Throughout her lifetime many of Alice's hours were spent working in her kitchen. She was always baking up large quantities of canned goods, baked goods and homemade meals for her large family. No one will forget her delicious homemade breads. She loved her family and life in the country. She was the official "garden supervisor," teaching all of her children how to work and enjoy the benefits of raising your own food. Once her family was raised, she then enjoyed the benefits of being able to "go out to eat!" Alice also knew how to quilt and sew and made many wonderful projects for her family and friends. She liked to play cards, especially in a 500 Club and also took in area rummage sales. She was a loving mother, grandma and sister who will be dearly missed by her family and friends.
She is survived by her children, David (Katharine) Mensen of Sauk Rapids, Alan (DelRae) Mensen of Browerville, Stanley (Cindy) Mensen of Grey Eagle, Mary (Joe) Lamusga of Browerville, Marvin (Deb) Mensen of Osakis, Carol (Randy) Witt of Henning, Daniel (Diane) Mensen of Grey Eagle, Gregory (Carol) Mensen of Lake Benton, Theresa (John) Witstine of Buffalo, Bernice Mensen of Sauk Centre, Paul Mensen of Hutchinson, Eugene (Vanessa) Mensen of Sauk Centre, Gerald (Catherine) Mensen of Duluth and Wayne (Anita) Mensen of Randall; 39 grandchildren, 21 great grandchildren; two sisters, Mary Ann Balster of Wilmont and Lucille Konz of Ontario, CA.
Preceding her in death are her parents, husband, Ray on April 24 of this year; son, Anthony Mensen who died while serving in Vietnam, infant daughter, Clara Ann Mensen, grandson, Alan Troy Mensen and great, granddaughter, Bracy Lynn Mensen and great grandson, Brody James Moen; sisters, Agnes Konz, Leona Reiffenberger, Verna & Marcella Vortherms; brothers, an infant brother and Lawrence and Joe Vortherms, Jr.
A Mass of Resurrection was held on Thursday, Oct. 14 at 11 am at the Immaculate Conception church in Osakis with Fr. David Petron officiating. Honorary pallbearers were all of her grand and great, grandchildren. Active bearers were, Anthony, Walter, Justin Mensen, Jason Lamusga, Eric Witstine, Joshua Witt, Jonathan Hedberg and David Hughes.
Inurnment is at the St. Alexius Cemetery in West Union, MN.

To order memorial trees or send flowers to the family in memory of Alice Mensen, please visit our flower store.