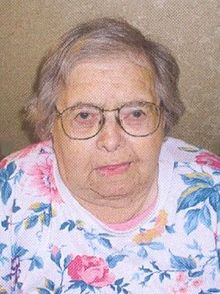 Amelia Rutten, age 97 of Osakis died on Sunday, June 10 at the Community Memorial Home in Osakis, MN where she was a resident.
Amelia Marie Rutten was born on November 15, 1914 in Spruce Hill Township, Douglas Co., MN to Alex and Stephanie (Summerauer) Zimmel. As a young woman, Amelia worked for various neighbors doing housework. She married Harry Rutten on June 27, 1939 at St. Nicholas Catholic Church in Belle River. For over 68 years, Harry and Amelia dairy farmed side by side on the north side of Lake Osakis. After Harry's death in 2007, Amelia moved to the Community Memorial Home in Osakis. She was a member of the Immaculate Conception Church and the St. Mary's Mission group.
Amelia was an excellent gardener and could often be found out working in her flower and vegetable beds. She kept busy during the winter months doing needlework and baking goodies to share with anyone who stopped in to visit.
Amelia is survived by several nieces and nephews and special friends, Darwin and Sue Sibell. She is preceded in death by her husband, Harry; two brothers, Ernest and Ray Zimmel and a sister, Angeline Zimmel.
A Mass of Resurrection will be held on Wednesday, June 13, 2012 at 10:30 am at the Immaculate Conception church in Osakis with Fr. Herb Gappa officiating. Musicians are the church funeral choir. Interment is at the Calvary Cemetery in Osakis, MN with pallbearers, Ken and Alex Rutten, Ray Rutten, Donald Rutten, Derrick Anderson and Derek Stoetzel.
Arrangements by the Roy-Hetland Funeral Home in Osakis, MN.

To order memorial trees or send flowers to the family in memory of Amelia Rutten, please visit our flower store.