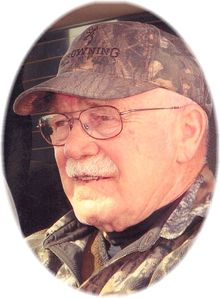 Arnie Anderson, age 83, of Osakis went to be with his Heavenly Father on Wednesday, May 5, 2010 from his home in Osakis, MN.
Arnold Kenneth Anderson was born on October 17, 1926 in Osakis, MN to Bernard and Inga (Kjesbu) Anderson. He graduated from Osakis High School and then furthered his education at Luther College in Decorah, IA. After receiving his teaching degree he took a job teaching Sr. High mathematics at Arlington High School in Arlington, MN. He was also the football coach for many years. In 1950, Arnie married Shirley Schultz. They were married for 30 years. After his retirement, Arnie returned full time to his boyhood home of Osakis. Arnie kept busy during the summer months painting houses. He was a member of the NRA, the Minnesota Teachers Union and for 28 years the Alexandria area Alanon. Some of Arnie's favorite hobbies were going out hunting and fishing. Arnie especially loved to hunt coyote and deer. He was a great sportsman who enjoyed being outdoors. He would often take long walks through the woods, regardless of the weather, even using snowshoes during the wintertime.
He is survived by his brother, Clifford (and friend, Bertha) Anderson of Galvaston, TX; many nieces and nephews.
Preceding him in death are his parents, his brothers, John, Russell, and infant twin brothers, Ronald and Donald Anderson; sisters, Beatrice Miller, Mabel Stedman, Eleanor Mueller and Margaret Anderson, Dorothy Anderson, Clara 'Kelly' Oslund.
A memorial service was held for Arnie on Monday, May 10 at 2:00 pm at the Sauk Valley Lutheran Church in rural Osakis with Rev. Steve Hilde officiating. Organist was Ione Johnson. Inurnment was at the Sauk Valley Lutheran Church Cemetery with honorary bearers all of his hunting crew.

To order memorial trees or send flowers to the family in memory of Arnold Anderson, please visit our flower store.