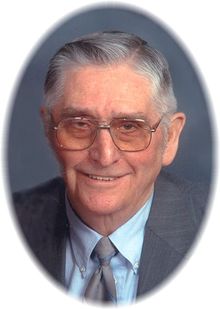 Life History for Arthur Bailey
Arthur Bailey, age 80 of Alexandria, MN passed away early Friday morning, Dec. 9, 2011 at the Knute-Nelson Memorial Home in Alexandria, MN.
Arthur David Bailey was born on September 18, 1931 in Ashley Township, Stearns County near West Union, MN. His parents were John and Dorothea (Volkmann) Bailey. He grew up on a farm in Todd County and attended grade school through eighth grade in West Union. He went to one year of high school in Sauk Centre and then attended the West Central School of Agriculture in Morris, MN, from which he graduated in 1948. Art was drafted into the US Army during the Korean War and served for two years. He returned to farm the same farm he grew up on in West Union Township. Arthur also helped start a drainage contracting company known as MBC Drainage. On December 28, 1968 Art married Martha Hubbeling. They were married for 42 years and had three children, Douglas, Brian and Maya. He attended Grace Baptist Church in Alexandria, MN.
Art enjoyed living in the country and being outdoors. He enjoyed working in his garden and going hunting and fishing. In his younger days he played fast-pitch softball and he took up playing golf in his later years. He liked to listen to old country and gospel music and looked forward to weekend card games, esp. cribbage with family and friends. He was a hardworking, devoted father, grandpa and brother who will be dearly missed.
He is survived by his children, Brian (Ericka) Bailey of San Diego, CA and Maya (Michael) Bailey Beach of Alexandria; 4 grandchildren, Stephen and Lindy Bailey and Elizabeth and Mary Beach; his siblings, Lois (Paul) Pischke of Sauk Centre, James (Gloria) Bailey of Villard, Barbara Weigers of Osakis, David (Jane) Bailey of Sauk Centre; many nieces and nephews.
Art is preceded in death by his parents, his wife, Martha who passed away only one month before him; a son, Douglas Bailey; a brother, Donald Bailey and brothers-in-law, Haven Weigers and Edward Pecenka.
Funeral services were held for Art on Thursday, December 15, 2011 at 11:00 am at the Grace Baptist Church in Alexandria, MN with Rev. Allen Travaille officiating. Interment was at the Greenwood Cemetery in Sauk Centre, MN.

To order memorial trees or send flowers to the family in memory of Arthur Bailey, please visit our flower store.