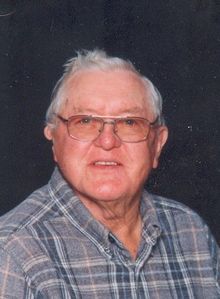 Augie Hinrichs, age 86 of Osakis passed away surrounded by his family on Thursday evening, May 2, 2013 at his home in Osakis.
On November 24, 1926 a little boy was born to Louis and Ida (Lubenow) Hinrichs in Osakis, MN. They named him August Richard Hinrichs. He attended Osakis Public School and graduated with the Class of 1945. Augie served his country during WWII in the US Army as a Tech, 5th Class with the 1171 Engineer Co GP and received the Victory Medal of the Occupation Medal Germany. After his honorable discharge from Ft. Sheridan, IL, Augie returned to Minnesota and worked for a time in the Twin Cities. On March 27, 1948 Augie married Betty Larson in St. Paul, MN. He then attended Lee's Barber and Beauty School under the G.I. bill and became a licensed barber. They moved to Osakis, MN where Augie went to work for Fred Galle before running his own business called Augie's Barber Shop for twenty-eight years in Osakis.
Augie was a member of the Osakis Lutheran Church and served on the church council. He also belonged to the Osakis VFW Post #7902. He also served on the Osakis School Board. For many years Augie drove bus for the Osakis School District and served as bus supervisor. In his later years, Augie also did insurance adjusting. He was the Little League and Babe Ruth baseball coach in addition to teaching the gun safety course each year. He was a member of the Osakis Sportsman's Club and the Osakis Lake Association. When the annual Senior "Let's Go Fishing" event happened each summer, Augie acted as their official fishing guide. He loved to fish and spent many hours out on the lake. Each fall he netted white fish and always shared his delicious smoked fish with family and friends.
Some of Augie's other hobbies included hunting, snowmobiling, golfing, bowling, cards, camping, and gardening. He was an avid sports fan and enjoyed cheering for the Vikings and Twins. He could always be found with his special black lab, Koko by his side.
He was a loving husband, father and grandpa who touched many lives, both young and old during his many years.
Augie is survived by his wife of 65 years, Betty Hinrichs of Osakis; 5 children, Cindy (Stan) Schmidt of Nelson, Vicki Hinrichs of Osakis, Tom (Val Hoeschen) Hinrichs of Osakis, Nancy (John) Waldorf of Osakis, Tim (Trish) Hinrichs of Alexandria; 10 grandchildren, Matt (Jen) Lano, Scott (Liz) Schmidt, Holly Anderson, Michael (Brittany) Schmidt, Marissa Hinrichs, T.J. Hinrichs, Jesse and Brooke Waldorf, Megan (Tim Sandgren) Hinrichs, Kayla (Spencer) Herness; 6 great grandchildren, Allie and Eli Anderson, Grace & Gavin Schmidt, Ella Schmidt and Tyson Herness; brothers, Don (Joan) Hinrichs of Osakis and Harold 'Bud' Sorensen of Shevlin, MN; many nieces and nephews.
Preceding him in death are his parents; step mother, Della Hinrichs; two brothers, Arnold Hinrichs and Clarence Sorensen.
Funeral services were held on Monday, May 6 at 11:00 am at the Osakis Lutheran Church with Rev. Ron Calvert officiating. Musicians were Leah Gulbrandson and Dana Hetland. Inurnment was at the Pleasant Valley Cemetery near Clotho, MN. Honorary bearers were his grandchildren and Dave Amdahl, Kearney Frank and Howard Berg. Military honors were provided by the Osakis VFW Honor Guard.

To order memorial trees or send flowers to the family in memory of Augie Hinrichs, please visit our flower store.