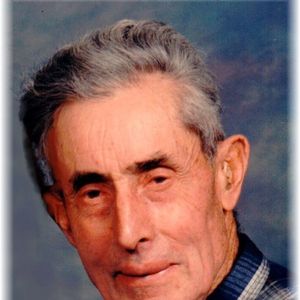 Bernard Kreemer, age 96 of Osakis passed away on Holy Thursday, April 13, 2017 at the Community Memorial Home in Osakis, MN.
On June 15, 1920 in Belle River Township, Douglas County, MN a son was born to Jacob and Anna (Rutten) Kreemer. They named him Bernard Leo, but everyone soon called him Bernie. He grew up on the family farm and attended country school through the eighth grade. When WWII broke out, Bernie was drafted into the U S Army in February of 1945. He achieved the rank of Staff Sargeant with the 34th Combat Engineers. He was honorably discharged in October of 1946 and returned home to continue farming and doing residential electrical work with area electricians. He worked for electricians Bob George, Sr and his son, Bobby, Jr., as well as Dean Alcott. Bernie was united in marriage to Marlene LeBrun on May 8, 1965 at the Good Shepherd Catholic Church in Golden Valley, MN. They raised three sons and Bernie continued to farm until he was 88 years old, retiring in 2008. He was a member of the Immaculate Conception Catholic Church in Osakis and belonged to the Knights of Columbus. Bernie also donated his time by helping at the parish in many volunteer capacities, especially when electrical labor was needed. He was also an usher as well as a Eucharistic Minister. For many years Bernie served on the Belle River Township Board and did Fire Inspections for Gordon-Hartford Insurance Company. He was a lifetime member of the Osakis VFW Post #7902, and in his retirement years belonged to the Osakis Senior Citizens club.
Bernie had many interests and hobbies. As a young man, he often designed and built many kinds of machines, and as an adult many hours were spent out in his shop doing fabricating or various types of metal work. He loved music and was able to play the accordion. Many evenings were spent with neighbors and friends playing music and socializing. He also liked to go to dances, work in his garden and plant trees. Bernie liked to go fishing each summer and was an avid reader.
He will live on in the memories of his wife, Marlene Kreemer of Osakis; three sons, Paul (Patty) Kreemer of Seattle, WA, Steven (Heidi) Kreemer of Osakis, Allen (Heather) Kreemer of Chanhassen, MN; six grandchildren, Louis, Henry, Bobbijean, Michael, Ethan and Samantha; great granddaughter, Aubrie Kreemer; many nieces and nephews.
Preceding him in death are his parents, Jacob and Anna and siblings, Joe, Ernest and Lawrence Kreemer, Mary Steidl, Laura Faber, Helen Traulich and an infant sister, Elsie.
A Mass of Resurrection will be held on Thursday, April 20, 2017 at 10:30 am at the Immaculate Conception Catholic Church in Osakis with Fr. David Petron officiating. Honorary pallbearers are the Knights of Columbus and active bearers are Ken Woodle, Fred and Jim Faber, Ken Rutten, Ray Rutten and Tom Brouns.
Interment is at the Calvary Cemetery in Osakis, MN.
Arrangements handled by the Roy-Hetland Funeral Home in Osakis, MN.

To order memorial trees or send flowers to the family in memory of Bernard Kreemer, please visit our flower store.