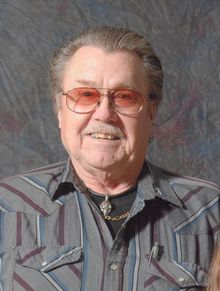 Life History for Carl Wells, Jr.
Carl Wells, Jr., age 73 of Osakis died on Thursday evening, Nov. 18 at the St. Cloud Hospital in St. Cloud, MN.
Carl was born on June 21, 1937 in Lamberton, MN to Carl and Laura (Schiffman) Wells, Sr. He lived in Lamberton for many years, marrying Kathy Voss in 1956 and raising nine children. He also lived in Marshall, MN, Minneapolis (and suburbs thereof) and also lived in Florida for awhile. In 1978 he returned to Minnesota. Carl owned and operated Carl & Sons Auto Body, where he did excellent vehicle paintwork and repairs. In 1987 Carl moved to Osakis and in 1992 was married to Laura Pederson. During this time he was working as a truck driver, doing long haul trucking of freight.
Carl was a member of the Osakis Lutheran Church and also sang in the church choir. He was a member of the Eagles Club and belonged to the Central Lakes Cruizers Car Club and the Nelson's Men's Club.
Besides his love for cars, Carl also loved riding motorcycle. He took many 'runs' all over the country. Going camping with his family and grandkids was another highlight for him. He enjoyed country music, being outdoors and going out fishing or hunting whenever time allowed. He enjoyed people and will be dearly missed by his family and friends.
Carl is survived by his wife, Laura of Osakis; children, Greg (Marcia Sicard) Wells of Osakis, Tammy Brandt of Phoenix, Cindy (Gary) Peterson of Monticello, Jackie Moberg of Benson, Tim (Donna) Wells of Glenwood, Curt (Brenda) Wells of Ramsey, Julie (Jasper) Lewis of Maricopa, AZ, Holly (Brian Greer) Wells of Osakis and Jody (Brian) Cook of Benson; 27 grandchildren; 30 great grandchildren; brothers, George (JoAnn) Wells of N. Dakota and Gary (Gail) Wells of Hinckley; brother and sister-in-law, Steve & Sue Pederson of St. Joseph, MN; many nieces and nephews.
He is preceded in death by his parents, Carl, Sr. and Laura Wells; grandsons, Trevor Lene and Michael Roop; his brother, Earl Wells, Sr.
Funeral services will be held for Carl on Tuesday, Nov. 23, 2010 at 5:00 pm at the Osakis Lutheran Church with Rev. Ron Calvert officiating. Visitation hours begin at 3 pm. Musicians are organist, Pat Converse and a duet will be sung by two of his granddaughters. Pallbearers are his grandchildren. Honorary pallbearers are the members and spouses of the Central Lakes Cruizers Car Club. A social follows in the church fellowship hall after the service.
Arrangements are handled by the Roy-Hetland Funeral Home in Osakis, MN.

To order memorial trees or send flowers to the family in memory of Carl Wells, please visit our flower store.