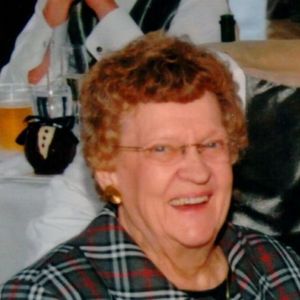 Charlotte Schultz, age 85 of Osakis passed away on Thursday, Feb. 23, 2017 at the Galeon in Osakis, MN.
Memorial services for Charlotte will be held on Saturday, March 4, 2017 at 2:00 pm at Osakis Lutheran Church with Rev. Rich Fitzer officiating. Visitation will begin one hour prior to the service. Inurnment is at the Nelson Cemetery, Nelson, MN.

Charlotte Irene Mikkelson was born on September 23, 1931 in Todd County, MN to Mikkal and Olga (Johnson) Mikkelson. Charlotte went to Osakis High School, graduating with the Class of 1949. Charlotte first worked at the Crippled Children's School in Jamestown, ND. She returned home and was married to Arnold Schultz on December 9, 1950 at the Osakis Lutheran Church. Together, they owned and managed the Osakis Pool Hall for over twenty-two years. It was during this time that the many relationships between OHS students and their families was nurtured, as well as those with the entire community. Charlotte bartended at the Walleye Lodge, the VFW Post and the Osakis Liquor Store. In 1983, the Schultz's purchased The Little Store, which was a local grocery and convenience store on E Main St in Osakis. They ran this business for thirteen years. During this time, Charlotte also began working at a REM home in Osakis, which is a residential home for those with special needs, and continued working there after closing the store in 1997. Throughout these years, they raised three children and Charlotte helped care for her husband, Arnie who was in a wheelchair for many years. She was active in church (Salem Lutheran and Osakis Lutheran) serving as organist, Sunday school teacher, and singing in the choir. Charlotte was a life member and former president of the Osakis VFW Auxiliary.
Charlotte grew up on a farm and liked to garden. She would do as much canning as time would allow, esp. jams and jellies. Charlotte was also an excellent cook and made sure to have enough on hand to feed any size crew that would stay for dinner. She loved music and enjoyed playing on the organ or piano. She naturally liked to socialize and knew many people from all her years at the Pool Hall and bartending. She and Arnold enjoyed working on crossword and jigsaw puzzles together. She enjoyed bowling, playing cards, and going dancing. She also loved to sew and spent countless hours embroidering. Charlotte was a lifelong Twins baseball fan and was a doting grandma to her grandchildren and great grandchildren.
She is survived by her children, Robert 'Robbie' (Mary) Schultz of Osakis, Richard 'Rick' (Tami) Schultz of St. Joseph, Kristin 'Kris' Barrett of Osakis; 8 grandchildren; 19 great grandchildren; two sisters, Arlene (Kenneth) Sorenson of Osakis and Marian Brynjulfson of Sauk Centre; a sister-in-law, Shirley Gillan of Sauk Centre; many nieces and nephews.
Preceding her in death are her parents, her husband, Arnold on Dec. 4, 2011; brothers, Harold, Merlin and Raymond Mikkelson; sisters, Katherine Marthaler, Thelma Marthaler, Lela Sax.
Memorial services for Charlotte will be held on Saturday, March 4, 2017 at 2:00 pm at Osakis Lutheran Church with Rev. Rich Fitzer officiating. Visitation will begin one hour prior to the service. Musicians are organist, Pat Converse and soloists, Tami Schultz and Angela Beutz. Urnbearers are David and Jessica Schultz. Honorary bearers are her grandchildren, great grandchildren and the Osakis VFW Auxiliary. Inurnment is at the Nelson Cemetery, Nelson, MN. Memorials are preferred to the the Knute-Nelson Hospice of Alexandria, MN.

To order memorial trees or send flowers to the family in memory of Charlotte Schultz, please visit our flower store.