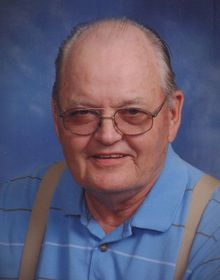 Life History for Clifford Euerle
Clifford Euerle, age 75 of Villard, MN died unexpectedly on Tuesday, May 21, 2013 at the Glacial Ridge Hospital in Glenwood, MN.
On March 5, 1938 a baby boy was born to William H. Euerle, Jr. and Edna L. (Zellmer) Euerle in Newport, Minnesota. They named him Clifford William Euerle. After graduating from Par-Ki in 1956, Cliff went to work for CF Industries in Pine Bend, MN. On September 12, 1959, he married Sharon Weitzel at the United Congregational Church in Cottage Grove, MN., where they resided, and began to raise six children. They moved to the Villard area in 1975 when Cliff was transferred to a supervisor position at the new Anhydrous Ammonia Chemical terminal in Glenwood, MN. He worked there for many years, retiring in 1997. Cliff kept busy in his retirement by helping local farmers and doing mechanic work. He was a jack of all trades and was always willing to help out a neighbor. Years earlier, Cliff was the fire chief for the East Cottage Grove Fire Dept and he continued that willingness to serve his community and church throughout his life. He volunteered on projects for Habitat for Humanity and was also active in the building of the new Villard United Methodist Church where he was a member. Cliff also helped out at church as an usher and belonged to the United Methodist Mens group. In addition, Cliff volunteered his time to help with cemetery maintenance at the Lake Amelia Cemetery.
Some of Cliff's favorite past times included doing yard work, beekeeping and maintaining his many bird feeders, maintaining his classic cars and traveling. He was an animal lover who always had a pet throughout his life. He was a kind and loving father, grandpa and brother who will be dearly missed by his family and many friends.
Cliff is survived by his children, Ray (Lynn) Euerle of Osakis, Mike Euerle of Villard, Scott (Linda) Euerle of Buffalo, Sherry (Tim Waulters) Euerle of Elk River, Marty Euerle of Robbinsdale and Dale (Teri) Euerle of Villard, MN; 18 grandchildren, Billy Euerle, Desirae Welle, Christie & Justin Euerle, Amber and Kyle Euerle, Stacey, Amanda, Ryan and Nick Wynn, Kari Volkmann-Carlsen, Tyler & Travis Euerle, Tammy Reddington, Rob Waulters, Melissa Compton, Steven & Adam Waulters; 16 great grandchildren; 2 brothers, Don (Bernie) Gundy of Fairfield Glade, TN, Clifford 'Butch' (Renee) Sockness of St. Paul; many nieces and nephews.
He is preceded in death by his parents, his wife, Sharon Euerle in 2007, two sisters, Bernice Miller and Irene Lewerer.
Funeral services were held for Cliff on Saturday, May 25, 2013 at 11:00 am at the Villard United Methodist Church with Rev. Alan Bolte officiating. Organist was Marj Lang. A special guitar song was performed by his son, Marty Euerle. Interment was at the Lake Amelia Cemetery in Villard, MN with honorary pallbearers being his grandchildren and active pallbearers his children.
Arrangements handled by the Roy-Hetland Funeral Home, Osakis, MN.

To order memorial trees or send flowers to the family in memory of Clifford Euerle, please visit our flower store.