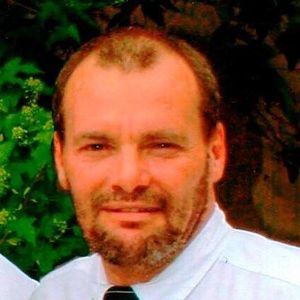 On December 27, 1966 a baby boy was born to Charles and Ardell (Svee) Maher at the hospital in Alexandria, MN. He was the third of four children and the youngest of all the sons. He grew up in Osakis and attended Osakis High School, graduating in 1985. While in school, Dave enjoyed being on the wrestling team. His junior year he earned a Regional championship which advanced him to the state wrestling tournament that year. He was very proud and spoke often of the many accomplishments he achieved while being a wrestler for Osakis High School.
After high school he worked for many years at Jennie-O Foods in Melrose. He then worked at WASP in Glenwood and has since been at Standard Iron in Alexandria for about the last 15 years.
On April 8, 2005 David and Melissa French were married. They made their home in Osakis and eventually moved to Alexandria. Dave was a good athlete and enjoyed playing all types of sports, but he was especially happy just being outdoors playing ball with his kids and grandkids. He was always was up to date on all of the local and professional sports scores and news. He loved to go hunting and fishing and took his family out camping often. Dave enjoyed people and liked to socialize with his family and friends. He and his family loved to get together to grill. Dave's children and family meant the world to him and any time he could spend with them was what made him happy. He could even be found regularly searching for frogs with his children down at "froggy pond."
Dave passed away unexpectedly on Wednesday, May 6, 2015 at his home in Alexandria, MN. He was a caring and gentle person who will be dearly missed by his family and all who knew him.
Left to mourn his passing is his wife, Melissa Maher of Alexandria; his children, Tim (Kelbi Conner) Maher of Alexandria, Shawn (Cassie) Maher of San Antonio, TX, Anna, Mariah, Riley and David (aka Bubba) Maher, Jr., all of Alexandria; 2 grandchildren, Marcus and Payton Maher; his father, Chuck Maher of Osakis; brothers, Ray (Sandy) Maher and Bob (Jill Christian ) Maher, all of Osakis; a sister, Karen (Chad Hamilton) Maher of Osakis; many nieces and nephews. He is preceded in death by his mother, Ardell Maher, his grandparents, and many of his aunts and uncles.
A service and celebration of Dave's life will be held on Tuesday, May 12 at 2:00 pm at the Osakis Lutheran Church with Rev. Kyle Peterson from the River of Life Church officiating. Interment will follow at the Calvary Cemetery in Osakis with honorary bearers being some of his fellow employees at Standard Iron of Alexandria. Active bearers are Mike Zimmerman, Mike Haak, Travis Lehmkuhl, Darren Thompson, Justin Praska and Scott Powers.

To order memorial trees or send flowers to the family in memory of David Maher, please visit our flower store.