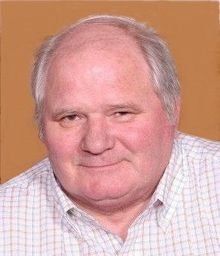 Dean Collins, age 73 of Osakis died unexpectedly early Thursday, Dec. 6 at his apartment in Osakis, MN.
On March 14, 1939 a son was born to Thomas and Irene (Sizer) Collins in Osakis, MN. They named him Dean Francis. He was a graduate of the Class of 1957 from Osakis High School. In addition to helping his family on the farm, he also worked for the Bellanca Aircraft Company in Alexandria, MN. On April 18, 1960 Dean married his sweetheart Karen Bruzik in Lake Reno, MN. They lived in the Alexandria area until moving to Osakis in 1965. For a time Dean drove a milk delivery route. His next employment was as a meat cutter at the Red Owl grocery store and then later at Harry's Grocery and also the Jack & Jill Grocery Store, all in Osakis. Landy's Meat Packing Plant in St. Cloud offered Dean a job and for several years he worked there. After a job cutting meat for the Osakis Locker, Dean worked for the Home Quality Foods (later called Polipnick's Grocery) in Sauk Centre. His last employment before retirement was as an assistant manager at Elden's Foods in Alexandria, MN.
Dean was a member of the Immaculate Conception Catholic Church in Osakis and belonged to the Knights of Columbus. Dean was very musical and in his younger days, he and his wife, Karen and friends, Tom and Gail Pitschka had a band called the KarenDeanos. They played at many area dance halls. Dean played the guitar and banjo and also gave private lessons. He enjoyed the chance to make music and socialize. He also enjoyed being outdoors and was a big Twins and Vikings fan.
Dean is survived by his children, Tammy Brown of Elbow Lake, Todd Collins of Alexandria, Gina (Steve) Lang of Osakis and Dr. Michael Collins of Dania Beach, FL; 7 grandchildren and 5 great, grandchildren; his brother, Duane (Edith) Collins of Mora and three sisters, Jeanette Fearing of Oakdale, Sarah (Larry) Horton of Sauk Centre, Mary (Clinton) Skalsky of Waite Park; many nieces and nephews.
He is preceded in death by his parents and his wife, Karen who died in 2009.
A memorial Mass of Resurrection will be held on Saturday, December 22, 2012 at 11:00 am at the Immaculate Conception Catholic Church in Osakis with a visitation time beginning at 10:00 am. Fr. David Petron is the officiant and music will be by the church choir. Inurnment is at the Calvary Cemetery in Osakis, MN.

To order memorial trees or send flowers to the family in memory of Dean Collins, please visit our flower store.