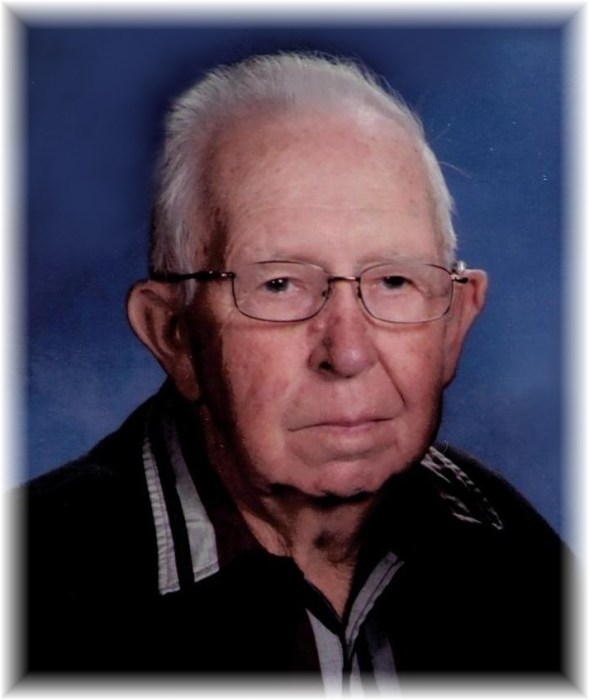 On April 3, 1929 a son was born to Thomas and Mabel (Thompson) Hetland in Eagle Bend, MN.  He was given the name Dean Allan and was their only son.  He grew up with his sisters, Delpha and Sally on the family farm.  After graduating in 1947 from Eagle Bend High School, Dean worked on the farm until he was drafted into the United States Army to serve his country during the Korean War.  He was a Corporal in the US Army from June 5, 1953 until his honorable discharge on May 16, 1955.  He received the Nat’l Defense medal and the US and Korean service medals.  Dean returned to Eagle Bend and began dairy farming.  On July 29, 1961 Dean married the love of his life, Beverly Weickert, whom he had met at a dance at the Clarissa Ballroom.  They became the proud parents of three children, Susan, Scott and Steven.  In addition to farming, Dean became a MN Farm Advocate, helping area farmers going through financial trouble.  He helped many farm families during his years as an Advocate, retiring in 2018 after thirty-four faithful years of service.  Dean and Bev moved off of the farm and into their Eagle Bend home in 1991.  He was a member of Faith Lutheran Church and served as chairman of the church board and also as a trustee.  Dean volunteered on the Hope Cemetery Board and served on the Eagle Bend School Board.  He was a proud member of the Eagle Bend VFW Post #6318.  In his free time, Dean loved to get out on area lakes to go fishing.  He’d take his family, their camper and the boat and thoroughly enjoyed their time together.  He was a talented woodworker, who could create a variety of wood projects.  From house remodeling to small wood crafts, Dean could do it all.  Many beautiful handcrafted items were given to family and friends.  He also enjoyed going hunting and doing gunsmithing.  Over the years he enjoyed sports, bowling, playing cards, socializing with friends and neighbors and watching his grandchildren and great grandchildren grow.  Many mornings were spent shooting the breeze with his buddies over a cup of coffee.  Dean had a great sense of humor and liked to make others smile.  He always had a kind word and not an enemy in the world.  He will be dearly missed and lovingly remembered by all who knew him.

He will live on in the hearts of his family, especially his wife of 58 years, Bev Hetland of Eagle Bend; his children, Susan (Roy Stanoch) Probst of Champlin, Scott Hetland of Cold Spring and Steven (Jenny) Hetland of Lecanto, FL; five grandchildren, Janessa Hetland, Shawnee Hetland, Michael Hetland, Rebecca Maloney, Rachael Hetland; four great grandchildren, Adein, Ava, Aubrey and Leroy;  a sister, Sally (Roger) Wedner of Klizer, OR; many nieces, nephews, cousins, friends and his faithful Pomeranian, Snickers.  He is preceded in death by his parents, a grandson, Corey Probst and a sister, Delpha Malone.

Funeral services for Dean will be held on Monday, February 3, 2020 at 11 am at Faith Lutheran Church in Eagle Bend with Rev. Allan Mortenson officiating.  Inurnment will be at the Hope Cemetery in Eagle Bend, MN with military honors provided by the MN National Honor Guard.

To order memorial trees or send flowers to the family in memory of Dean Hetland, please visit our flower store.