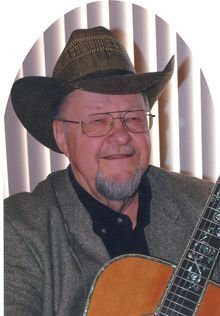 Life History for Dean 'Freddie Dean' Muehlenhardt
Dean Muehlenhardt, age 72 of Osakis passed away unexpectedly early Tuesday morning, February 5, 2013 from his home in Osakis, MN.
Dean Fredrick Muehlenhardt was born on February 10, 1940 in Osakis, MN to Fred and Pearl (Ewing) Muehlenhardt. He grew up on the family farm and graduated from Osakis High School with the Class of 1958. Already as a young man, Dean developed a love for music and with the instruction and guidance of his parents he soon learned to play guitar, accordion and fiddle. The first band he formed was called the Paltons. It was in 1960 and it was the first rock 'n roll band in Douglas County. Soon Dean was devoting many nights a week to his music in addition to giving lessons and doing music sales and still finding time to milk dairy cows. On August 26, 1961 Dean married his sweetheart, Nancy Hoosline in Osakis.
Dean's next band focused on country music and was known as Freddie Dean and the Country Gentlemen and they played throughout Minnesota. After a big break with a Nashville agent, the group played back-up music for many Nashville celebrities. By that time Dean knew over 400 songs and was able to play them all without the aid of sheet music. Freddie Dean then downsized to become a duo called Burl and Ives with his close friend Larry Bjorstrom. His next group was called Freddie Dean and the Comstocks. Over the years, in addition to playing music, Dean worked for and owned music, TV and furniture stores. Finally, a reunion with former musician friends formed his final band. They were called the Freddie Dean Reunion Band and they often donated their talents to do fundraisers for local causes. Freddie Dean shared his love of music with thousands of people throughout his life and was still enjoying entertaining local residents at area Senior Centers and nursing homes. He also worked part time at Larry's TV in Osakis for the last several years. Dean enjoyed morning coffee at the cafAC. and rarely missed a day with the guys there.
Dean was a member of the Osakis Lutheran Church.
He is survived by his loving wife of 51 years, Nancy Muehlenhardt of Osakis; his children, Erin (Bruce) Beck of Palisade, MN, Troy (Renee) Muehlenhardt of West Union, Chad (Steph) Muehlenhardt of Osakis; 4 grandchildren, Ashley (Tony) Beck, Bethany (John) Peterson, Benjamin and Mary Muehlenhardt; a stepgranddaughter, Jacqueline (Luke) Ebensteiner; step great granddaughter, Madeline; sister-in-laws, Holly (Gary) Hotovec of Danube and Heidi (Mike) Ciepielinski of Osakis; several nieces and nephews.
Dean is preceded in death by his parents.
A celebration of life was held for Dean on Friday, February 8, 2013 at 11:00 am at the Osakis Lutheran Church with Rev. Ron Calvert officiating. Musicians were organist, Pat Converse and soloist, Larry Bjorstrom. Internment was at the Lakeside Cemetery in Osakis with honorary bearers, Darrell & Bev Schultz, Larry Bjorstrom, Bob Wilken, Larry Richter, Lois Ketelle and Dennis & Judy Suedbeck.

To order memorial trees or send flowers to the family in memory of Dean Muehlenhardt, please visit our flower store.