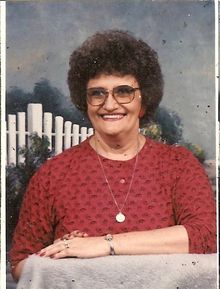 Roy-Hetland Funeral Home
320-859-2118
Delores L. Thimmesh, age 70, a resident of Osakis, died Monday, February 8, 2010, at her home.
Funeral services will be held 11 a.m., Friday, February 12, 2010, at Immaculate Conception Catholic Church in Osakis with Deacon Stan Hennen officiating. Music will be provided by organist, Charmaine Hartmann and the church choir. Burial will take place at the church cemetery.
Visitation will be 4-8 p.m., Thursday with 7 p.m., prayer service at the Roy-Hetland Funeral Home in Osakis. The visitation will continue one hour prior to the service at the church.
Arrangements are by Roy-Hetland Funeral Home in Osakis.
Delores Lela Thimmesh was born October 20, 1939, to Fred and Viola (Johnson) Floy in Thornton, Iowa. She grew up in Ventura, Iowa where she attended public schools. Following her education she worked as a waitress and in a bakery in the Mason City/ Clear Lake area. She was united in marriage to Keith Torstenson in Amarillo, Texas. Following their marriage they moved to Osakis in 1978. She was united in marriage to James Thimmesh at the Methodist Church in Osakis in 1982. She worked as activities director at Bethany Home in Alexandria from 1985 until her retirement in 1994. She was a member of Redeemer Lutheran Church in Osakis and a former member of T.O.P.S. Her hobbies included flowers, dancing, singing, music, reading, rummage sales and going out for lunch.
Delores is survived by a son, James Floy of Osakis; a daughter, Carla (Jay) Wardell of Osakis; a brother, Donald (Irene) Floy of Decorah, Iowa; two sisters, Gloria (Harold) Martin of Rockford, Iowa and Carol (Harold) Pueggel of Garner, Iowa; five grandchildren, Yvonne, William, Westin, Amber and Allison; and one great-grandson, Gavin.
She is preceded in death by her parents, husband, James; brother, Marvin; and three sisters, Edna, Rene and Ferne.
Pallbearers will be William DeVries, Weston DeVries, Art Mass, Fred Taylor, Arnie Shaw and David Floy. Honorary pallbearers will be Jay Wardell, Dale DeVries and Keith Torstenson.

To order memorial trees or send flowers to the family in memory of Delores Thimmesh, please visit our flower store.