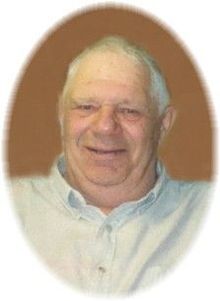 Denis Dueker, age 72 of Osakis passed away on Friday, August 10, 2012 at his home in rural Osakis.
Denis John Dueker was born on October 9, 1939 to Nicholas and Marie (Sauer) Dueker in Alexandria, MN.
He was raised on the family farm and continued farming there all of his life. He also did welding at Engle Fabrication for many years. On May 5, 1962 Denis was united in marriage to Kathleen Halverson at St. Alexius Church. They celebrated their fiftieth year of marriage this past May. Denis was a member of the St. Alexius Church in West Union and was active in the Knights of Columbus and the St. Joseph Society. He also served on the West Union Township board for many years.
Denis had many hobbies and interests. He learned to fly airplanes as a young man and enjoyed flying for many years and was a member of the Mid-State Flyers Club. He also liked to go hunting and fishing. He was a loving husband, father, grandpa and brother who will be dearly missed by his family and many friends.
Denis is survived by his wife, Kathleen Dueker of Osakis; 8 children, Katrina (Alan) Beste of St. Joseph, Brian Dueker of Sauk Centre, Linda (Ken) Voller of Osakis, Bonita (Michael) Gamradt of Sauk Centre, Loretta (Paul) Williams of Villard, Darlene (Brian) Haider of Melrose, Denise Dueker of Osakis, Koren (James) Zurn of New Prague; 25 grandchildren; 1 great grandchild; siblings, Marion Thieschafer of Moundsview, Jane (Lenny) Murray and Jean (Richard) Otte, all of Alexandria, James Dueker of Grandin, ND, Dorene (Mike)Merten of Sauk Centre, MN.
He is preceded in death by his parents, Nick and Marie; two infant sons, John and Denis, Jr.; a brother-in-law, Nick Thieschafer.
A Mass of Resurrection was held on Tuesday, August 14, 2012 at 10:30 am at the St. Alexius Catholic Church in West Union with Fr. Andrew Marthaler officiating. Musicians were the church choir with Julie Bottelberghe as organist. Interment was at the church cemetery with his grandchildren as honorary pallbearers. The urn bearer was Ryan Beste, USMC.

To order memorial trees or send flowers to the family in memory of Denis Dueker, please visit our flower store.