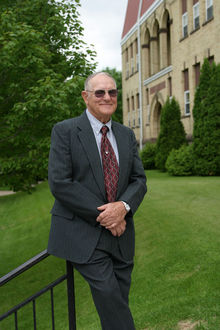 Dewayne Zabel, age 86 of Osakis passed away on Sunday, May 13, 2012 at the Community Memorial Home in Osakis, MN.
Dewayne Frederick Zabel was born on August 31, 1925 in Leslie Township, Todd County, MN to Fred and Elsie (Kowalke) Zabel. He grew up and helped on the family farm in Leslie Township. On June 29, 1944 he married his sweetheart, Leona 'Curly' Jenkins in Wadena, MN. They farmed in Leslie Township, Todd County for many years. Dewayne served his country in the Army during WWII. Dewayne was a member of the Osakis VFW Post and also belonged to the Long Prairie American Legion club. For many years, Dewayne and his family were members of the Trailblazer's Saddle Club in Osakis and he was also in the Ho Ho Kam Men's Club in Coolidge, AZ during the twenty-five years he and Curly wintered there.
Dewayne loved the outdoors, especially when he could be out hunting, snowmobiling or fishing. He really enjoyed the trips with his family on various camping trips. They would search for mushrooms and blueberries and enjoyed both nature and the memories they made together. He would also take his family 'frogging' each year. Dewayne and Curly were able to enjoy many trips in their motor home each winter and he also put on many miles when hauling and selling lumber brought back from Montana. After retirement, he enjoyed taking trips to Mille Lacs. He was a wonderful Dad, Grandpa and brother who will be dearly missed by his family and friends.
Dewayne is survived by his children, Dianne (Gary) Leagjeld of Long Prairie, Daniel 'Fritz' (Norma) Zabel of Hampton, Danette (Scott) Schad of Long Prairie and Darcy (Joe) Pesta of Long Prairie; 18 grandchildren; 16 great, grandchildren; daughter-in-law, Judy (Mike) Zabel-Felling of Sauk Centre; sister, Cleora VanValkenburg of Long Prairie; many nieces and nephews.
He is preceded in death by his parents, wife, Leona 'Curly' in 2000, a son, Douglas Zabel and a daughter, Cynthia Zabel; brothers, Ervin, Everett and Derald Zabel; a sister, Helen Fearing.
Funeral services will be held for Dewayne on Thursday, May 17, 2012 at 2:00 pm at the Osakis Lutheran Church with Rev. Larry Pearson officiating. Musicians are Anneliese and Paula Bratten and Pat Converse. Interment is at the Evergreen Cemetery in Long Prairie. Military honors will be conducted by members of the Osakis VFW.
Honorary casketbearers are the members of the Osakis VFW. Active bearers are Jason Leagjeld, Steve and Mike Zabel, Justin Pesta, Matthew Schad, Adam Pesta, Grant, Samuel and Daniel Schad, Joseph, Zach and Gabe Pesta.

To order memorial trees or send flowers to the family in memory of Dewayne Zabel, please visit our flower store.