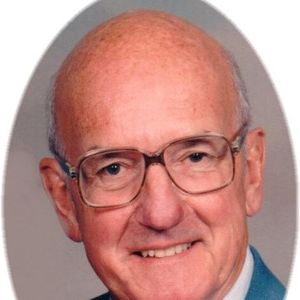 Donald W. Hentges , 86 went to be with the Lord February 12, 2015 at Douglas County Hospital, Alexandria, MN after suffering a stroke during recovery from surgery.

Donald William Hentges was born March 16, 1928 in Fargo, North Dakota, to William N. Hentges and Madge (Beach) Hentges. He graduated from Osakis High School in 1946 and enlisted in the United States Army and served in the 89th Military Police Company until honorably discharged in March of 1948 after which he joined the U.S. Army Reserve.

Don married Elaine Evelyn Byland of Osakis in January 1949 and Graduated from Minnesota School of Business. In October 1950 he returned to active duty and served in Korea during the Korean War until May of 1952 when he was honorably discharged with the rank of Sargent. Upon his return home, he worked for Wayne Pump Company until 1966 when he started Hentges Enterprises Inc as a manufacturer's representative agency until his retirement in 1992.
Don and Elaine lived in the Minnetonka area for 54 years where they raised their four children. In 2003 they moved back to Osakis and built a new home on the north end of Lake Osakis.
Don enjoyed traveling across the country and worldwide. He was an active member of the Family Motorcoach Association, Monaco North Central Club and the VFW.
He will be dearly missed by his three daughters, Barbara Tauber (John), Sandra Ritter (Tex), Debora Trojanowski (John), one son William Hentges (Denise), twelve grandchildren and 18 great grandchildren.

Interment is at St Margaret's Cemetery in Minnetonka, MN on Tuesday, Feb. 17 at 3:30 pm.

To order memorial trees or send flowers to the family in memory of Donald Hentges, please visit our flower store.