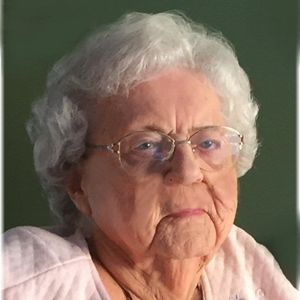 LIFE HISTORY for DORIS HARTH
Doris Harth, age 96 of Osakis passed into her eternal life on Tuesday, April12, 2016 at the Knute Nelson nursing home in Alexandria where she had received care with love and dignity for the past seven months.
Doris was born almost ninety-seven years ago on a farm in West Union Township, Todd County, MN. She was the eldest child of Oliver & Ursula 'Daisy' (Fraser) Anderson. She attended country school before graduating from Osakis High School in 1937. In 1938, she was married to Jerold R. Harth at Zion Lutheran Church in Sauk Centre, MN. Doris and Jerry were life time residents of Osakis where they raised their six children.
Doris was well known and liked in the community where she worked at various businesses throughout the years including the dry cleaners, cafe, hardware store, clothing store, the "cheese store," and Smith Lake Resort. As a great lover of children, she especially enjoyed her years as the driver for kids attending the local Head Start program, as well as her years as a Cub Scout den mother, Sunday School and Vacation Bible School teacher. She belonged to Osakis Lutheran Church where she was an active member of the Naomi Circle. She also belonged to the Osakis VFW Auxiliary. In addition to spending time with her kids, grandchildren, and great grandchildren, Doris loved a good game of cards with friends, bowling, sewing, cooking, and canning. She also had a passion for genealogy and left a great legacy of family history and folklore knowledge for her many descendants. In her later years, Doris had the opportunity to travel and visited many places in the Continental U.S. as well as Hawaii, South Korea, Japan, England, Germany, Austria, Denmark, Sweden and Norway.
Doris had a heart of gold and the patience of a saint. No one doubted that they were loved by her and she will be dearly missed and forever remembered by her family, neighbors and friends.
She is survived by her children, Merle (Barb) Harth of Osakis, Sharon (Tom) Donohoe of Harrisonville, MO, Jeri Kae (Bob) Ahrens of Grey Eagle, MN, Jeanne (Gary) Kuehn of Wabasso, MN, Rick (Jacki) Harth of Osakis, and Kirby (Steve Holme) Harth of Palm Springs, CA; 19 grandchildren; 32 great grandchildren; a brother, Jerald Anderson of Lonsdale, MN; two sisters, Luella (William) Wilson of Delray Beach FL and Verla Peterson of Pequot Lakes, MN; many nieces, nephews and cousins.
Preceding her in death is her husband, two grandsons, Tyler Harth and Brady Kuehn; parents, and brothers, Everett and Harold Anderson.
Funeral services will be held on Sunday, April 17, 2016 at 2:00 pm at the Osakis Lutheran Church with Rev. Rich Fitzer and Rev. Dr. Chad Donohoe officiating. Organist is Pat Converse. Interment is at the East Evergreen Cemetery in Osakis with honorary bearers Amy Weller, Colin Donohoe, Chad Donohoe, Kara Manning, Stephanie Karnes, Steven Ahrens, Sarah Sirivong, Kami Pribnow, Christopher, Benjamin, Zachary and Joshua Kuehn, and Paige Welle.
Active bearers are Kyle Harth, Shawn Donohoe, Kelly Donohoe, Stuart Ahrens, Kirby Kuehn and Jordan Harth.
Memorials prefered to the charity of your choice.

To order memorial trees or send flowers to the family in memory of Doris Harth, please visit our flower store.