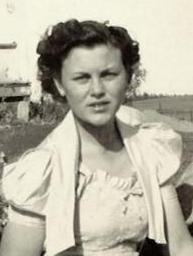 Dorothy was born on Sept. 16, 1921 to Cloyd ‘CD’ and Ruth (Afflerbaugh) Hawkins of Osakis, MN.  She graduated from Osakis High School and attended business school in St. Cloud, MN.  She spent most of her youth and young adult life in the Osakis area.  Dorothy was a loving daughter, sister, wife, mother, grandmother and great grandmother.  She was kind, generous, a helping hand with a giving heart but feisty.  She married Raymond W. Hanson on October 3, 1944.  They lived on a farm near Nelson, MN and had two children, Jeanne and Dale.  Ray moved his family to Riverside, CA in 1956.   Dorothy and Ray returned to the Osakis area in 1978 once he retired.  Dorothy worked in the summers for Just Like Grandma’s and in the kitchen services at Osaksi Public School.  Dorothy married Marvin Hartman in January of 1996.  They spent winters in California and summers in Minnesota.  After his passing in 2008, Dorothy moved back permanently to Osakis.

Dorothy loved words and writing, in all of its many forms, whether short stories or poetry.  She even tried her hand writing T V scripts.  She also had a love for chocolate, traveling and the outdoors.

On Tuesday, November 24, 2020, Dorothy passed away at the age of 99 years as a resident at the Community Memorial Home in Osakis, MN.  Her family would like to thank them for the wonderful care and friendship they gave her.  She dearly loved them.

She will be greatly missed.  Soar on eagles wings, Mom, the best is yet to be.

Due to COVID, a family graveside service and inurnment will be held in the spring or summer of 2021 at the Fahlun Lutheran Cemetery in Nelson, MN.

Condolences and memories may be left on her Tribute page at www.royhetland.com.  Assisting with arrangements are Roy-Hetland Funeral Home, Osakis, MN.

To order memorial trees or send flowers to the family in memory of Dorothy Hartman, formerly Hanson, please visit our flower store.