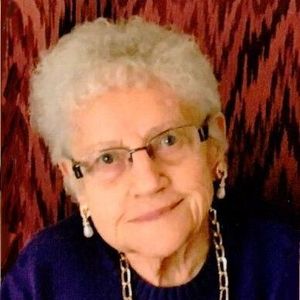 Dorothy Pederson, age 96 of Osakis began her new life on Friday, September 23, 2016 from the Galeon in Osakis, MN. Funeral services are Friday, September 30, 2016 at 11:00 am at Osakis Lutheran Church in Osakis, MN. Visitation hours are from 4 - 8 pm on Thursday at the Roy-Hetland Funeral Home in Osakis and also one hour prior to the church service. Interment is at the Kinkead Cemetery in Alexandria, MN.
LIFE HISTORY FOR DOROTHY M. PEDERSON
On August 20, 1920 in Posen Township, Yellow Medicine Co., MN a beautiful daughter was born to Martin W. and Ida (Plath) Bruss. She would be their only child and they named her Dorothy Margaret. She was baptized at St. John's Lutheran Church in Wood Lake, MN and later was confirmed at Yellow Medicine Lutheran Church in Hanley Falls, MN. After her graduation from Wood Lake High School, Dorothy continued working for her parents in their restaurant and soon caught the eye of Joseph A. Pederson. They were married on February 3, 1946 at her home church of St. John's. After living in St. Paul for a time, the Pedersons moved to a farm by Hanley Falls. They also farmed near Cottonwood before returning to live in St. Paul. They raised two sons, Myron and Bruce. They moved back to farm in Wood Lake in 1961 and after twenty years retired to Marshall, MN. In 1985 they made Osakis, MN their home. They enjoyed spending summer weekends at either Lake Minnewaska or Pelican Lake.
Dorothy became an active member of the Osakis Lutheran Church and belonged to the Ladies Aid. She also volunteered her time as a member of the Community Memorial Home Auxiliary and the Osakis Senior Citizens. In 2003, Dorothy was added to the Older Americans Hall of Fame (Douglas Co. Committee on Aging), and was sponsored by the Osakis Senior Club. She was a former member of the Cottonwood American Legion Auxiliary, serving as Auxiliary President in both 1960 and 1969. She also received a Certificate of Appreciation in 2004 from the St. Agnes Parochial School for her many hours of volunteer service there.
From her years at the restaurant and living on the farm, Dorothy learned to be a wonderful cook. She enjoyed gardening and canning and keeping her family well fed. She was an avid sports fan and especially liked watching professional basketball. Travelling was another favorite activity. Dorothy had a sharp mind and loved to play cards and dominos. She spent many winter hours with a crochet hook in hand, making beautiful pieces to share with her family and friends. She was a gracious, talented and caring mother, grandma and great grandmother who left a beautiful legacy. Blessed be her memory.
She is survived by her sons, Myron (Vicky McKenzie) Pederson of Woodbury, MN and Bruce (Mary Kay) Pederson of Osakis, MN; 8 grandchildren and 15 great grandchildren.
Waiting to meet her in heaven are her parents, her husband, Joseph (who died Oct, 12, 1995) and a granddaughter, Angela Pederson.
Honorary pallbearers are her grandchildren and great grandchildren. Active pallbearers are Jason, Michael, Joe and Josh Pederson, Stephanie Cossette and Jonathan Withers. Interment is at Kinkead Cemetery in Alexandria, MN.
Arrangements provided by Roy-Hetland Funeral Home in Osakis, MN.

To order memorial trees or send flowers to the family in memory of Dorothy Pederson, please visit our flower store.