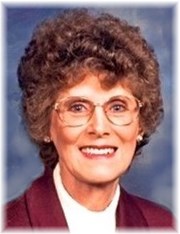 Dorothy Wysoski, age 85 of Osakis passed away early Wednesday, January 15, 2020 at the  Galeon in Osakis, MN.

Dorothy Leone Winter was born on August 31, 1934 in Chippewa Falls, WI to Ed and Amelia (Klaubaum) Winter.  She moved with her family at a young age to Rock Lake, ND and graduated from school there in 1952.  After high school and a year of recovering from a bout of polio, Dorothy moved to work at a hospital in Grand Forks, ND.  It was there that she met John ‘Jack’ Wysoski.  They fell in love and were married in 1955 in Grand Forks.  They lived in Larimore and Hillsboro, North Dakota during the early years of their marriage before moving to Osakis, MN in the fall of 1961.  Here they raised their family of three children, Jon, Marcia and Jay.  Once the kids were in school, Dorothy took a job working for pharmacist, Neil Gillis at the Gillis Rexall Drug.  Dorothy enjoyed helping people and was a familiar face there for many years before retiring in 1996.  After their retirement, the Wysoskis enjoyed wintering in south Texas with their son, Jon.  They were able to enjoy thirteen years of warm-weather winters there until health issues required staying closer to home.  Dorothy was a member of the Immaculate Conception Church in Osakis, MN.

Some of Dorothy’s hobbies included making afghans, doing crossword puzzles, reading, traveling and enjoying classical music.  She was a devoted fan for her children and grandchildren’s sporting and extracurricular school activities.  Dorothy was a kind and caring wife, mother, grandma and sister who will be dearly missed and fondly remembered.

Left to cherish her memory is her husband of 64 years, Jack Wysoski of Osakis; children, Jon Wysoski of San Angelo, TX, Marcia (Jim) Lowrie of Redmond, OR, Jay (Diane) Wysoski of Walker, MN; 6 grandchildren, Sean and Alissa Wysoski, Andy Bowder, Angela (Justin Frauendienst) Bowder, Amy (Eric) Blanchford and Nicholas Wysoski; 6 great grandchildren; a brother, William ‘Bill” (Dee)Winter of Irrigon,OR; sisters, Eilene Miettinen of Omaha, NE and Elaine Seed of Lapine, OR; many nieces and nephews.  She is preceded in death by her parents, a grandson, Edward Wysoski and a sister, Marilyn Lindsay.

A Celebration of Life and Memorial Mass will be held for Dorothy on Monday, January 20, 2020 at 11:00 am at Immaculate Conception Church in Osakis with Fr. Bob Kieffer officiating.  Lector is Elaine Hoefener.  Inurnment is at the Calvary Cemetery in Osakis with honorary urn bearers by her great grandchildren, Mason Pin-Bowder, Peyton and Colton Frauendienst, Ethan, Kari and Landon Bowder.

A visitation/gathering time will begin at the church on Monday morning at 10:00 am.

Arrangements are by the Roy-Hetland Funeral Home in Osakis, MN

To order memorial trees or send flowers to the family in memory of Dorothy Wysoski, please visit our flower store.