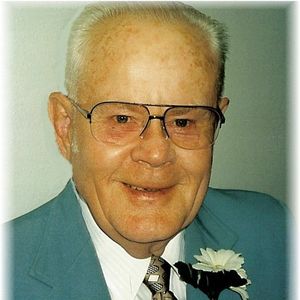 Dr. James L. Adams, age 96 of Osakis, formerly of Mankato, went after a long and productive life to meet his Savior from the Bethany Home in Alexandria, MN on Thursday morning, Jan. 11, 2018.
James was born on June 29, 1921 in Maurice, Iowa to James and Florence (Larkin) Adams. He graduated from Sioux City Central High in 1939 and attended Morningside College in Sioux City, graduating in 1943 with a degree in education. He married Luverne on June 3, 1945 in Sioux City, IA. In 1951 James received his Masters degree in Education Administration from the Univ. of MN. In 1961, he received another Master's degree in Math, Physics and Chemistry from the Univ. of South Dakota. James completed his doctorate in Mathematics and Education Administration in 1980 from the Univ. of Nebraska. He spent 43 years teaching in Secondary Schools and at the College level. He taught high school Math, Science and Instrumental Music in both Iowa and MN. These locations included Hartley, Sutherland and Laurens, IA as well as Balaton and Osakis in MN, serving for twenty years as a high school principal at these schools. From 1966 to 1986 he was a professor of Mathematics at Mankato State Univ., Mankato, MN. In 1996, Dr. Adams retired and built a home on Lake Osakis.
Dr. Adams was involved in many organizations, including Past President of the Lyon Co. Assoc., past President of Vikingland Area Retired Educators (Alexandria) and remained active on the Executive Board and program committee. He was a life member of the NEA, past President of the Kiwanis Golden-K of Alexandria, past Secretary and member of the Board of the Osakis Memorial Home; past member of the Board of the MN Council of Teachers of Mathematics; past Board member of the MN Valley Federal Credit Union and a charter member of the MEA Credit Union organizing committee. He belonged to the State and National Associations of Secondary Principals, the National Physics Honor Society (Sigma Pi Sigma,) Phi Delta Kappa Education Society, was an active member of the American Federation of Musicians, the Assistant Scout Master and Scouting committee, the Junior Chamber of Commerce, a Civil Defense director and a member of the REAM (Retired Educators Association of MN) in addition to belonging to several Sportsmen's Clubs and a Community Chorus.
Dr. Adams was asked to present at many various educational conferences. He spoke or presided at several Regional, State and National Mathematics conferences, including in San Diego, Seattle, St. Paul, Grand Forks, Toronto, Sioux Falls and Detroit. He gave a colloquium talk on Paper Folding in Mathematics; summer workshops for area teachers and those visiting from Mexico; a Math seminar for AVTI teachers at Albert Lea, MN and was a judge for the Regional Science Fairs; he wrote newspaper and radio articles about on The Impending Crisis in Mathematics Education. Some of the honors he received over the years included the Volunteer Hall of Fame for Douglas Co., MN in 1996, the Distinguished Alumni Award from Morningside College in 1983 and the REAM Service Award in 2001.
James was an active member at the United Methodist Church in Osakis and served as treasurer for 14 years and served as the choir director. He was a member of the Osakis Men's Club and was named Man of the Year in 1997. He was also a member of the Osakis Country Club. As a musician, James played trombone in a professional dance band and in city bands at Elks and Eagles Clubs, in addition to directing several high school bands. He had many joys and interests including woodcrafts, bowling, traveling, fishing and music.
Left to mourn his passing is his wife of 72 years, Luverne of Alexandria; son, Michael J. (Roberta) Adams of Papillion, NE, a daughter, Rev. Susan Adams-Trembath of Powell, WY; three grandsons, Devon, Colby and Austin Adams; step-grandson, John (Lianna Erickson) Trembath; nieces and nephews.
Preceding him in death are his parents, James and Florence Adams and son-in-law, Darrell Trembath.
Funeral services for Dr. Adams will be held on Wed., Jan. 24, 2018 at 2:00 pm at the United Methodist Church of Alexandria, MN with Rev. Craig Haberman officiating. Visitation hours are from 5 - 7 pm on Tues., Jan 23 at the Roy-Hetland Funeral Home in Osakis and one hour before the service at United Methodist Church in Alexandria. Burial will be at the Kinkead Cemetery in Alexandria, MN with active pallbearers Mike, Devon, Colby and Austin Adams. Honorary bearers are Rev. Alice Tobler, Margaret Anderson, El & Ann Holm, David & Roxanne Olson.

To order memorial trees or send flowers to the family in memory of Dr. James Adams, please visit our flower store.