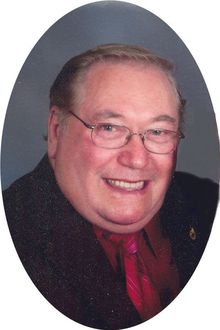 Dwayne Bickett, age 68 of Osakis died unexpectedly at his home on Monday, March 15, 2010.
Dwayne was born on July 17, 1941 in Melville, ND, the son of Merle, Sr. and Emma Lee (Driesen) Bickett. He graduated from Carrington High School and attended Wahpeton School of Science. He also served his country in the National Guards for six years. Dwayne was employed in many different careers over his lifetime in Carrington. On October 16, 1965 he married Anita Brickner at the Sacred Heart Catholic Church in Carrington, ND. In 1998 they moved to Osakis, MN to be closer to their three children. He was currently employed as a Knights of Columbus Insurance agent. Dwayne was a very active member in the 4th Degree Knights of Columbus and was very honored to be included in the Brotherhood of the Knights of Columbus.
Dwayne loved spending time with family and friends. Hunting, fishing, and jet skiing were some of his favorite activities. He was especially happy taking family photos and tending his flowers and garden.
He was preceded in death by his parents, Merle Sr. and Emma Lee.
He is survived by his wife, Anita of Osakis, three children, David (Denise) of Fergus Falls, MN, Laurie (Eric) Schultz of Kasson, MN and Dorene (Chad) Herring of Nolensville, TN; 8 grandchildren; 2 brothers, Merle (Sheila) Bickett, Jr. and Donald (Peggy) Bickett, all of Carrington, ND; 1 sister, Merleen (Bruce) Gussiaas of Grace City, ND; many nieces and nephews.
A Mass of Resurrection will be held on Friday, March 19, 2010 at 10:30 am at the Immaculate Conception Catholic Church in Osakis with Fr. David Petron officiating. Giftbearers are his grandchildren. Honorary pallbearers are the members of St. Michael's Council #3176 of the Knights of Columbus and the members of the 4th Degree Knights of Columbus, Queen of Peace Assembly #546. Active bearers are Richard Daas, Gary Harguth, Jerome Neis, Glenn Mehoring, Bud Schock and Martin Schultz.

To order memorial trees or send flowers to the family in memory of Dwayne Bickett, please visit our flower store.