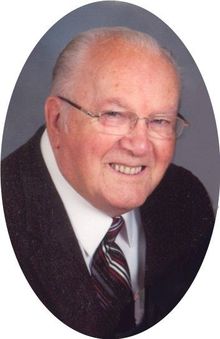 Life History for Duke Decann
Edmund 'Duke' DeCann, age 83 of Osakis left this life unexpectedly on Tuesday evening, August 3, 2010 at the Douglas County Hospital in Alexandria, MN.
On July 15, 1927, Edmund Lawrence DeCann was born to Jesse and Anna (Roerig) Decann in Osakis, MN. He went to Osakis High School and then enlisted in the U.S. Navy. On June 11, 1946 Edmund, known by the nickname 'Duke' married his sweetheart, Phyllis Gaslin in Osakis, MN. Duke took a job building private railroad cars in Omaha, NE for a time before returning to the Osakis area as a building contractor. He did construction and cabinetry work. In addition, he did maintenance work for Osakis Public Schools. He retired from construction work in 1978 and continued cabinetry and antique radio and clock restoration work. Currently, Duke was working part time for the Elder Network in Alexandria.
Duke was a lifelong member of the Immaculate Conception parish in Osakis and belonged to the Knights of Columbus. He was also a charter member of the Osakis Lions Club and a past commander and member of the Osakis American Legion. Duke was very active with the Alexandria Osman Temple Shriners and belonged to an antique radio club. For over twenty-two years, he served on the Osakis City Council. Duke was very civic minded and contributed many, many volunteer hours to the betterment of the Osakis community. Other interests included antique furniture and clock restoration, vintage automobiles and attending area auction sales. He was an avid baseball and football fan and also enjoyed watching the birds at his birdfeeders. He was a loving and generous grandpa who loved his family. Blessed be his memory.
Duke is survived by his wife, Phyllis DeCann of Osakis; a son, Jay (Wendy) DeCann of Melrose; grandchildren, Becky Anderson, Jessie (Eddie) Yurczyk, Heidi Kienitz, Shelby & Josh DeCann; great grandchildren, Mitchell & Amanda Anderson, Andrea Marie & Jake Yurczky, Kaylynn Kienitz, Rhiley Kienitz and Loren Buggert; a brother, Don (Barb) Decann of Osakis; many nieces and nephews.
He is preceded in death by his parents, two daughters, an infant, Jeanne Decann and Jeanne Lynn Kienitz; a brother, Earl 'Jumbo' DeCann.
A Mass of Resurrection will be held for Duke on Friday, August 6, 2010 at 11:00 am at the Immaculate Conception Catholic Church in Osakis with Fr. David Petron officiating. Interment is at Calvary Cemetery in Osakis. Honorary pallbearers are Don DeCann, Walt Wrabek, Al Armagost, Clarence Mielke, Chub Hensley, Jim Walsh, Jim Mattson,Tony Borash and the members of the Alexandria Osman Temple Shriners Club. Active bearers are Eddie Yurczyk, Jim DeCann, Fred Julig, Harlan Tenhoff, Stan Schultz and Gary Mikkelson.

To order memorial trees or send flowers to the family in memory of Edmund DeCann, please visit our flower store.