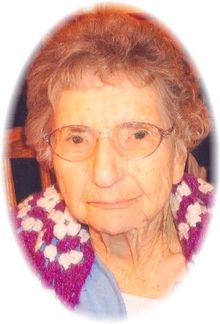 Edna Sogge was born on April 15, 1919 in Longville, MN to Charles and Louisa (Conen) Slagle. On July 25, 1942, Edna married Osmund Sogge at the Longville Community Church in Longville, MN. They would celebrate 60 years of marriage prior to Osmund's death. Edna farmed with her husband in the communities of Windom, Grove City, Glenwood and Brooten. In 1961 they bought a farm near Osakis and farmed there until retirement. In 1977 they bought a house near the 'Little Store' in Osakis and lived there for many years. They moved to the Manor Apartments in Osakis in August of 2003. Edna enjoyed farm life and was always willing to help Oz in the fiends, do chores around the farm and even help milk the cows. Edna also loved to garden. She always had a large garden and thoroughly enjoyed canning. After the move to town, they cut down on the garden but planted more flowers. They so enjoyed sitting outside together. Edna worked at the Community Memorial Home for 15 years and enjoyed the people . She was very active in her Sauk Valley church choir, ladies aide, bible study and quilting sessions. When her eyes became too weak to quilt those tiny stitches, she became the cook for the group. Many days she provided lunch and cleaned up for the quilters. She was a member of the VFW Auxiliary, where she worked many hours preparing food for weddings, anniversaries and class reunions. She also held office in the Auxiliary and marched in many parades on their behalf. She was a member of the Community Memorial Home Auxiliary and enjoyed many lunches with her former workers. In her final years at the Manor Apts., she enjoyed walking over to the nursing home and visiting with the people. She loved visiting, then she would play piano (by ear) and shock everyone. She really enjoyed entertaining others and being in the limelight. Edna moved to Terrace Heights Assisted Living in May of 2008, and then in December of that year to the Bridge Well Memory Unit, where she has since resided. She attended church services every Sunday at CMH once she could no longer drive out to Sauk Valley and occasionally would provide the special music for a Sunday service.
Edna is survived by her daughter, Diana Ahl of Clearwater, MN; grandson, Michael; great granddaughter, Rebecca; a sister, Alverna (Robert) Trousil of Clara City; a brother, Glenn (Helen) Slagle of Longville, MN;; brother-in-laws, Ansel (Anne) Sogge of Sauk Centre, John (Lois) Sogge of Augusta, GA; sister-in-laws, Bert Chewning of Edina, Carol Harder of Mountain Lake, Benny (Bob) Deming of Alexandria and Laura Sogge of Osakis; over one hundred very special nieces and nephews.
Preceding her in death are her parents, her husband, Osmund in 2001; 5 brothers, Ed, Minor,Frank, Roy and Ken Slagle (MIA in Korea); 4 sisters, Hazel Sunquist, Mildred Mix, Gladys Bakeberg and Dorothy Pugel; son-in-law, Ian Ahl;

To order memorial trees or send flowers to the family in memory of Edna Sogge, please visit our flower store.