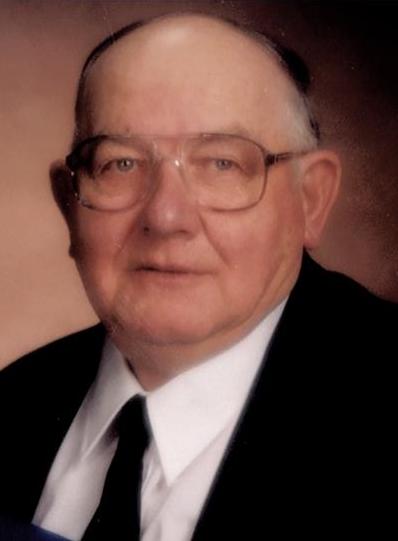 Edward August Schmidt was born on May 1, 1926 in the town of Leaf Valley to August and Suzanne Schmidt. He was born in his grandparent’s home where his family lived at the time. When Ed was one, his family moved out of his grandparent’s house to a farm about a mile away. Ed started school when he was 7. He walked to school about 2 miles away. He attended school District Number 59 for grades first through third. At this time, they moved to another farm by Belle River Township. He was nine years old when he was the janitor for his teacher at District Number 92. He would ride his pony to school and fire up the stove, ride back home again until it was time for school. Ed had to quit school when he was in the 7th grade because his dad got very sick from pneumonia and he had to helped with the chores.   During the drought years of the thirties, he would herd the cows with his dog, Fanny.  Ed and his mother would plow the fields with a walking plow pulled by two horses. They each had a plow. Ed would also pick potatoes for $1.50 a day. With this money he saved and bought a new red bike for $24.95. Ed also trapped mink and muskrats for money. When he was sixteen, he bought his first car, a 1929 Model A Coupe for $98.00. Later on he traded this car for a milking machine.

Eddie met the love of his life, Maxine Kraemer, when they were 17 at a dance in Miltona. Their first date had to be cancelled because they were quarantined for Scarlet Fever.  They married on June 4, 1946 when they were both 20 at the Immaculate Conception Church.  They first lived on a farm located by Carlos or as Eddie would call it, the Joe Zeller farm. In October of 1947, they moved to the farm by Nelson which Eddie lived until his death. Here they raised their four sons and one daughter.

Eddie drove milk truck for both Carlos and Nelson. He drove for 6 years. Through the years Eddie did custom hay baling in the summer and snow blowing in the winter. He plowed snow for 27 different families.  Back then there weren’t any cell phones so people would call the Nelson Creamery and leave their names, then when Eddie would haul in his milk in the morning, he would pick up the list of names.  Eddie enjoyed his farm and all of his Guernsey and Jersey cows. Eddie loved to talk about the good Ol’ days, his memory was very sharp. He could carry on a conversation with anyone.

Eddie is preceded in death by his loving wife, Maxine, parents August and Suzanne Schmidt, daughter in law, Marilyn Schmidt, and an infant sister.

Funeral services will be held on Thursday, Dec. 3, 2020 at 11:00 am at the Immaculate Conception Church in Osakis with Fr. David Petron officiating.  Interment is at the Calvary Cemetery in Osakis with his grandchildren, Delrene Tschida, Rebecca Ellman, Peter, James, Jason , Joshua, Matthew and Mark Schmidt, Megan Prescott, Robbie and Rory Dunn, Jenna Helgerson and Tana Ziesmer as pallbearers.

Visitation will be held from 4:30  - 8 pm on Wednesday evening, Dec. 2 at the Roy-Hetland Funeral Home in Osakis respecting all COVID requirements of face masks and social distancing.

Condolences and memories may be left for Eddie at www.royhetland.com under his Tribute page.  Arrangements by Roy-Hetland Funeral Home, Osakis, MN.

To order memorial trees or send flowers to the family in memory of Edward 'Eddie' Schmidt, please visit our flower store.