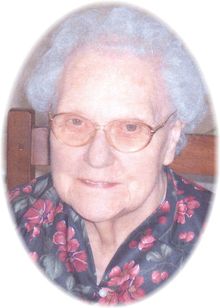 Life History for Eileen Lang
Eileen Lang, age 91, longtime elementary teacher in Osakis, passed into her new life on July 25, 2013 from the Peaceful Bliss Assisted Living facility in Alexandria, MN.
Eileen was born in Redwood Falls, MN on May 2, 1922 to George and Della (Paulsen) Willcox. As a young girl she moved with her family to Roseau, MN. After her high school graduation Eileen attended the St. Cloud Teacher's College and received her teaching certificate. She later completed her bachelor's degree in teaching at Bemidji State College. On September 2, 1945 Eileen was married to Gordon Lang in Humboldt, MN. She lived in several small towns such as St. Vincent, Eden Valley, Cosmos, Osakis and Sauk Centre. After teaching in Warroad from 1958 until 1962, Eileen then took a position at the Osakis Public School in the fall of 1962 and remained teaching there until her retirement in 1987. It was here that she raised her five children.
Eileen was very active in her church, civic and school organizations. She was a member of the United Methodist Church and also directed the choir and was the superintendant for the Sunday School program. She served as both the president and district treasurer for the UMW. Eileen was the president and secretary for the Osakis Education Association and served four years at the state level. In addition, she also found time to be the Parent/Teacher president. Her retirement didn't alter Eileen's commitment to serve her community. She soon became involved with the Osakis Senior Citizens Club and eventually served in all three chairs as Secretary, Vice President and President. She also was the manager of the Mission Store in Villard for 13 years and spent many days helping at the store or taking local seniors to various appointments or volunteering for the Meals on Wheels program. Eileen never tired of helping others. Besides spending time with her family and grandkids, some of her other favorite past times included quilting, gardening, playing cards and reading various books and periodicals.
She is survived by her children, Dennis Lang of Alexandria, MN, John (Mary) Lang of Fargo, ND, Ray Lang of Mount Airy, MD and Patty (Joseph) Pavelko of Leesburg, VA; 13 grandchildren; 20 great grandchildren; a son-in-law, Richard Pederson of Osakis.
Preceding her in death are her parents, a daughter, Peggy Pederson, a grandson, Joshua David Lang, daughter-in-law, Donna Lang, 2 sisters, Esther Derifield and Frieda Willcox.
Funeral services will be held for Eileen on Thursday, August 1, 2013 at 10:00 am at the United Methodist Church in Osakis with Rev. Alice Tobler officiating. Interment is at the Redwood Falls Cemetery in Redwood Falls, MN. Active pallbearers are her six grandsons. Honorary pallbearers are her seven granddaughters and her former teaching colleagues from Osakis. Arrangements handled by the Roy-Hetland Funeral Home, Osakis, MN.

To order memorial trees or send flowers to the family in memory of Eileen Lang, please visit our flower store.