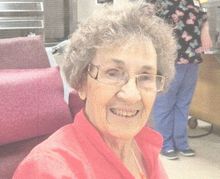 Life history for Betty -
Elizabeth Lavinia Hogan was born on April 11,1916 on a farm near Checotah, Oklahoma. She was one of nine children born to Jordan and Vernon (Ross) Hogan and often referred herself as 'an Okie from Muskogee.' In high school, she was an avid basketball player on the six women's high school basketball team and often commented that she thought girls should have the same rules as boys. Leaving Oklahoma during the 'dirty thirties' (as the dust bowl days were known) Betty moved to California to work for her oldest brother, Bill. It was here that she met Jim Ellis on a blind date, and on February 5, 1939 they were married in Las Vegas, NV. One week after their marriage, Jim lost his job as a surveyor for an oil company. Not daunted, the couple purchased an ice cream parlor for $300 in Porter, CA. "It was a good thing we both liked ice cream during those tough times. I think Jim actually gained a little weight," laughed Betty. They moved to Minnesota the next year after buying a farm in rural Osakis near Smith Lake from Jim's uncle, John Jensen. They purchased the farm in 1940 and actively farmed for the next 40 years. They joined Jim's parents, Ray and Martha Ellis in raising turkeys during WWII. In addition, they started renting boats for fishing and at the encouragement of friends, built cabins in 1955 and started Ellis Resort. The resort became Betty's major life's work. You were only a stranger once at the resort. Betty had a fantastic memory of all the customers and could recall birthdays, anniversaries and how many fish they caught. Every year she mailed personalized, hand written Christmas letters to every customer. Twice a week, all the customers came together for a community fish fry, with Betty frying the fish and introducing everyone. Oftentimes she even caught most of the fish! Even today grand children of customers still vacation at Ellis Resort on Smith Lake, known now as Smith Lake Resort.
Betty was a member of the First Presbyterian Church in Osakis and belonged to the Ladies Aid. She was also a member and past Worthy Matron of the local Eastern Star.
Besides her love for people Betty also enjoyed traveling, dancing, fishing and bowling. She was an avid card player and loved to play poker, bridge, cribbage, whist, canasta or any other game of chance, including dice. She played a lot of Whist, participating in many local and out-of-state Whist tournaments.
Betty is survived by her husband of 74 years, Jim Ellis of Osakis; two sons, Tom (Eleanor Groby) Ellis of Wabasha, MN and Mike Ellis of Osakis; 6 grandsons and numerous great grandchildren; a brother, Bob Hogan of Checotah, OK; many nieces and nephews.
She is preceded in death by her parents, 3 sisters, Inez Hogan, Johnie Lee Brown, Dorthea 'Dot' Lee Sanger; 4 brothers, Bill, Ross, David and Tom Hogan.
In the words of long time neighbor and family friend Lynn Schultz, "Betty Ellis made Osakis a much more interesting place to live."

To order memorial trees or send flowers to the family in memory of Elizabeth Ellis, please visit our flower store.