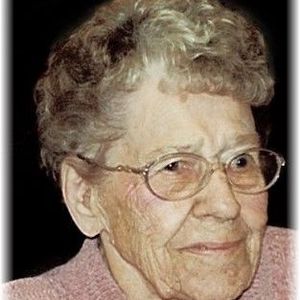 Heaven gained a beautiful soul on Friday, June 1, 2018 when Elizabeth
'Beth' Fraune passed away at the age of 100 years from the Galeon in Osakis
where she was a resident.
Elizabeth Ida Fraune was born on December 11, 1917 in McPherson, Kansas
to Myron and Alma (Slabech) Lingle. She moved with her family to Ogilvie
and graduated from high school there. She attended Mora Teacher Training
School and received her teaching certificate. Her first assignment was at a
country school in Kanabec County north of Ogilvie. After two years she was
hired to teach at the Dist. 63 School in Todd County. She married Francis
Fraune on March 5, 1938 and they made their home in Osakis. Beth taught at
the Bearson School in Douglas County for 6 years and then at the Marthaler
School, also known as Dist. 114 in Todd County for 10 years. When an
opening became available at St. Agnes Parochial School in Osakis, Beth was
hired as an elementary teacher there and worked from 1967 until 1983. Even
after retirement, she continued to volunteer her time and help to students
all the way through 2010. Her love for teaching children never waivered and
she was an inspiration to the younger staff with her talents to bring the
best out of her students. She coaxed the kids to strive for perfection in
every subject, no matter their age or ability. She and her husband, Francis
were members of Immaculate Conception parish, where Francis was employed as
custodian of the church and school for many years. Beth loved her students
and followed their progress through high school and beyond. She attended
many performances and sporting events at Osakis and loved cheering for 'her
kids' every minute of it. She loved sports of all kinds and followed her
favorite college teams faithfully. The Twins games were always tuned in to
her TV or radio. Beth enjoyed visiting with neighbors and friends and liked
to play cards. She will be fondly remembered by all who knew her.
She is survived by her daughter, Janet (Ron) Pederson of Oakdale; two
grandchildren, Todd (Julie) Pederson and Mindy (Chris) Gross; 4 great
grandchildren, Melody, Maxwell, Carl and Ashley; her brothers, Arthur 'Red'
(Diane) Lingle of Lawrence, KS, Edward Lingle of Collinsville, OK; sister,
Shirley (Elmer) Gatz of Wichita, KS and sister-in-law, Gertrude Lingle of
Hutchinson, KS; many nieces and nephews. She is preceded by her husband,
Francis in 1999; brothers, Dwight, Jack, Royce, Kenneth, Harold and Gary
Lingle; sisters, Lauvera Lingle, Margaret Rivett.
A Mass of Resurrection will be held for Beth on Monday, June 4, 2018 at
11:00 am at the Immaculate Conception Catholic Church in Osakis with Fr.
Robert Keiffer officiating. Interment is at the Calvary Cemetery in Osakis
with honorary pallbearers the St. Agnes School and Staff. Active bearers
are Dave Zerr, Randy Crumb, Mike Bowman, Truman Hanson, Mark Ferris and Mark
Pomerleau.
Memorials are prefered to the Douglas County Hospice or St. Agnes
School.
Arrangements by Roy-Hetland Funeral Home, Osakis, MN.

To order memorial trees or send flowers to the family in memory of Elizabeth Fraune, please visit our flower store.