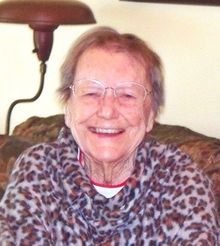 Elna Juberian, age 90 of Alexandria passed away on Wednesday, June 15, 2011 at the Douglas County Hospital in Alexandria, MN.
Elna Elaine Tvedt was born on September 22, 1920 in Jasper, MN to Holden and Ella (Brauer) Tvedt. She was a graduate of Central High School in Alexandria, MN with the Class of 1938. On March 24, 1940 Elna married Clarence Herrick. They lived in Flandreau, South Dakota and also in California. Clarence & Elna returned to southern Minnesota near Pipestone, where Clarence worked as a salesman. They eventually returned to live in the Alexandria area and owned and operated The Cove bar in Osakis. Clarence passed away in 1971. On January 19, 1974 Elna married Frank Juberian at his farm north of Osakis. Frank passed away in 2005 and Elna then moved to the Bethel Manor Apartments and then to Winona Shores of Alexandria, MN.
Some of Elna's favorite past times included working out in her flower garden or spending time in the kitchen cooking or baking. She was an excellent cook and always canned enough produce to feed her family throughout the year. She also loved animals, especially her pet cats. She also enjoyed going bowling, playing cards, doing crossword puzzles and reading cookbooks.
Elna is survived by her children, Clifford (Kay) Herrick of Jamestown, North Dakota, Patricia (Bill) Murphy of Goodyear, AZ and Shirley Dunn of Alexandria, MN; six grandchildren, Curt, Dave and Steve Herrick, Jeff & Kim Gramstad, Beth Housen; 7 great grandchildren and 1great, great grandson.
Preceding her in death are her parents, her husbands, a brother, Harvey Tvedt and a sister, Helen Stromberg. Blessed be her memory.
Private services were held for Elna on Friday, June 17, 2011 at the Roy-Hetland Funeral chapel in Osakis with interment at the St. Nicholas Cemetery in Belle River, MN.

To order memorial trees or send flowers to the family in memory of Elna Juberian, please visit our flower store.