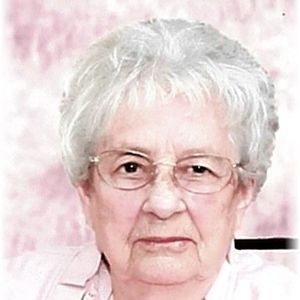 Elnora Helms, age 94 of Osakis passed away on Friday, January 5, 2018 at the Douglas County Hospital in Alexandria, MN.
Elnora Marie Montgomery was born to David and Hattie (Bissonnett) Montgomery on July 27, 1923 in Laurel, Nebraska. She moved as a young girl with her family to Manvel, ND and graduated from Manvel High School in 1942. As a loving daughter, Elnora postponed her future plans to move to Grand Forks and care for her ailing mother. While living there she worked as a clerk at the local five and dime store. On May 19, 1945 she would be married to her sweetheart, Walter Helms in Crookston, MN. They later moved to White, South Dakota and then they moved to Osakis, MN and Elnora worked at the Fingerhut Company for nine years. In 1976 they moved back to White and lived in the country and Elnora worked as a cook for the White Care Center. Walter died in 1996, and in 1997 Elnora moved into the town of White, moving to Osakis in 1999. She lived at the Heritage Apartments until 2007 when she entered Assisted Living, first in Osakis and then at the Nelson Gables in Alexandria, MN. While in Osakis Elnora belonged to the Redeemer Lutheran Church and when living in Alexandria she attended services at Calvary Lutheran. Besides being a wonderful cook, who spoiled her family with homemade bread, Elnora liked to do embroidery work and raise beautiful flowers and vegetables in her garden. She enjoyed music and attending dances. When it was baseball season, she had the Twins games on and was a big fan. She also liked to play cards, esp. Whist and shake dice. No one can count the number of crossword puzzles she completed as well as putting together a variety of puzzles. In her younger years she enjoyed traveling to visit relatives and friends and enjoy the countryside. She was a kind and loving mother, grandma and sister who loved her family dearly. She will live on in the hearts of her family and friends.
She is survived by her children, Roger (Faye) Helms of Kerkhoven, MN, Dianne (Dennis) Chouanard of Osakis, Sharon (David) Eastlund of Little Falls, Gary Helms of St. Peter, Sheila (Paul) Ness of Brookings, SD; 8 grandchildren; 10 great grandchildren; a sister, Darlyne Martin of East Grand Forks, MN; many nieces and nephews.
Those preceding her in death are her parents, husband, Walter, four brothers, Lloyd, Archie, Alva and Leonard Montgomery and two sisters, Mabel Iverson and Flora Korff.
Memorial services will be held for Elnora on Friday, Jan 12 at 2:00 pm at Nelson Gables Governor's Room in Alexandria with Rev. Linnae Grabner-Hegg officiating. A gathering will begin there one hour prior to the service. Burial is at the Fairview Cemetery in White, South Dakota next to her husband, Walter. Active bearers are her 8 grandchildren, Junior Helms, Joshua, Kyle and Justin Haber, Ryan Eastlund, Mindy Sylvestre, Dianne and Tony Helms. Honorary pallbearers are her great grandchildren, Landon, Corbin and Elijah Haber, Ericka Eastlund, Amare, Lincoln and Ava Juliette Sylvestre, Jordan, Haylie and Hannah Helms.
Arrangements by the Roy-Hetland Funeral Home in Osakis, MN. www.royhetland.com

To order memorial trees or send flowers to the family in memory of Elnora Helms, please visit our flower store.