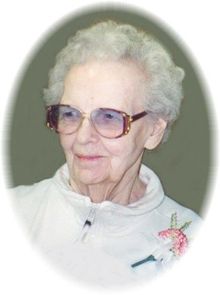 Life History for Elsie Boltz
Elsie was born April 1, 1910 to August and Eva (Smith) Soderstrom at Stacy, MN the youngest of 3 children. Older brothers were Hubert who later lived in Canada and Leonard who lived in Mahnomen. At age 3 months, her family moved to Mohall, ND where they farmed. She attended Hamlet country school in which she described as fun; walking to school with neighbor kids, carrying homemade lunches in syrup pails & being taken by horse and sled in winter. In 1930 the family moved to Alida, MN, where she met and married Arthur Ortendahl in 1931. They farmed land so close to the beginnings of the Mississippi that you could jump across it. They adopted two children in the 1940's, Loren Robert and Phyllis Rae. Soon Art's asthma and Elsie's allergies dictated that being in that area wasn't good for their health, so they headed for the cities in 1943 settling in NE Minneapolis. Elsie was a homemaker and cared for over 400 children in the late 40's and early 50's for the Lutheran Social Services, newborns to school age. She made her own baby formula and never knew what a Pamper diaper was. At nearly age 50, Elsie went back to school graduating with honors in 1959 from Rogers and Benner Beauty School and then opened her own shop, later employing her own daughter as a co-beautician. When Art retired, they moved near St. Anthony Village. Crocheting became her hobby, even making bedspreads and large afghans. Art passed away in 1978. In visiting back in ND, she had made a re-acquaintance with a widowed school friend and in1979 she married Floyd Boltz and moved to his town of Kevin, Montana. There she was very active in the Good Neighbor Club, loved to shop in Great Falls, plus go traveling in their camper. They even went to North Pole, Alaska, where one son lived. Clipping recipes was her sport and Elsie was always known as a good cook/baker as she loved to try out new recipes. After Floyd passed away in 1998, she made Osakis Community Memorial her home for over 14 years. Elsie loved to dance. Just turn on the country western music and watch her come alive. She reached the age of 102 and passed away on July 11, 2012. She leaves to mourn her son Loren (Lil) Ortendahl of Osakis and daughter Phyllis Jensen of Coon Rapids; 7 grandchildren, Lenae Marusak, Lori Moberg, Lowell & Lee Ortendahl, Lynn Held, Kurtis Jensen and Kayla Carlson; 15 great grandchildren, and 4 great great grandchildren; plus 4 step children and their families. Preceding her in death were her parents, husbands, brothers, and son-in-law David Jensen. God bless her memory.
Funeral services were 2:30pm Sunday, July 15, at the Terrace Heights Chapel of Galeon in Osakis. Rev. Alice Tobler officiated with Pat Converse as pianist. Burial is at the Sunset Memorial Garden in Minneapolis. Active pallbearers were by grandsons. Honorary pallbearers were by granddaughters and Elsie's caregivers at the Community Memorial Home. Arrangements were by the Roy-Hetland Funeral Home.

To order memorial trees or send flowers to the family in memory of Elsie Boltz, please visit our flower store.