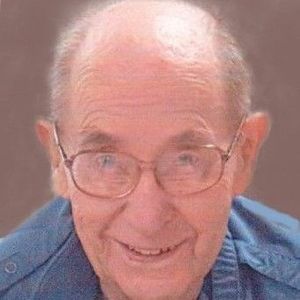 Elwood Grove, age 98 left this world for his new life on Thursday, Dec. 1, 2016 from the Galeon in Osakis where he was a resident.
On September 10, 1918, a son was born to Gilbert and Lydia Grove in Fortuna, N Dakota. They named him Elwood and he grew up and graduated from Fortuna High School in 1937. During WWII, Elwood served his country as a Private 1st Class in the U S Army. He served in the Guadal Canal, the Northern Solomons and the Asiatic-Pacific Theatre campaigns. He received five overseas service bars, and was wounded twice in battle and awarded two Purple Hearts. After returning from the war, Elwood worked for a few years in Hoffman, MN and then in Sauk Centre, MN as a gas station attendant. He then got a job in 1955 with Burlington Northern Railroad, working as a cook. He retired in 1982 after 27 years. On September 20, 1969 Elwood married Gladys Stimson in Osakis, MN. She was known as the Prairie Sweetheart and sang in country bands. Elwood enjoyed music, too and accompanied her to many performances. They lived in West Union where Elwood loved to do yardwork and tend to his garden. He was also a baseball fan and enjoyed getting together with friends for card games. As a hobby Elwood also did some furniture upholstering for friends and neighbors. He was a member of the Osakis VFW Post # 7902.
He is survived by his stepchildren, Audrey Douvier of Sauk Centre, Gerald (Jackie) Stimson of Fort Wayne, IN, Janetta (Freelyn) Wenzel of Parkers Prairie; 14 grandchildren; many great, great, great and great, great, great grandchildren; a brother-in-law, Virden (Mary Mae) Olson of Sauk Centre; daughter-in-law, Bernette Stimson of Stillwater; sisters-in-law, Myrtle Judes of Sauk Centre and Evelyn Grove of Elbow Lake; many nieces and nephews.
Preceding him in death are his parents, his wife, Gladys who died in April of this year at the age of 102; seven siblings, Anard and Orien Grove, Elvina Ogden, Lester Grove, Dorothy Schmidt, Theodore and Clinton Grove; stepson, Wayne Stimson; son-in-law, Harold Douvier.
Memorial services for Elwood will be held on Tuesday, Dec. 6, 2016 at 2:00 pm at Osakis Lutheran Church in Osakis with Rev. James Walburg officiating. Memories will be shared by family members. Musicians are Pam Wenzel and Dana Hetland. Military honors by the MN National Guard Honor Guard. Inurnment is at the Lakeside Cemetery in Osakis with urnbearer, Bill Wenzel.
Arrangements handled by Roy-Hetland Funeral Home in Osakis, MN.

To order memorial trees or send flowers to the family in memory of Elwood Grove, please visit our flower store.