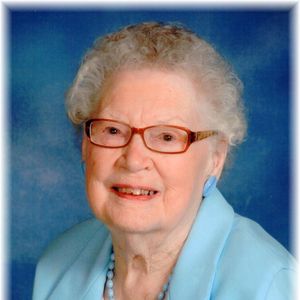 Life History for Erma Craig
Erma Craig, age 92 of Osakis left this world for her new life early Tuesday morning, April 19, 2016 from the Galeon in Osakis, MN.
A beautiful baby girl was born on December 7, 1923 in Freeport, MN to William and Elizabeth (Ahrens) Hemker. They named her Erma Marie and she was one of a family of five children. After she graduated from Melrose High School in 1941, Erma attended the St. Cloud Beauty College and became a licensed beautician. She worked for five years in the Twin Cities and Freeport before getting married to Earl Craig on April 24, 1946 in Freeport, MN. They moved to Chicago for a time and also lived near New Munich, MN before settling in Osakis in 1951. In 1956 Erma opened a business in her home called Erma's Beauty Shop and cut, permed and styled hair there for over thirty-six years.
Erma lived her faith and was a very active member at Immaculate Conception Catholic Church. She belonged to the Christian Mothers Confraternity, the Catholic Women's Association, the St. Elizabeth Mission group, volunteered at St. Agnes School and served as a member and director of the church Organ Choir for sixty years. In addition, Erma volunteered as a sacristan and was the church laundress. No one could whiten, starch and press the altar linens better than Erma. It was a ministry she maintained even into her nineties. She also loved to sew, quilt and do handiwork of various kinds. She would quilt, crochet, knit and embroider many beautiful projects as gifts for family, friends and her church. Hundreds of babies received baptismal gowns and/or blankets which she made and donated. Erma also enjoyed gardening, crafting, music and cooking and was very proud of her family, grandchildren and great grandchildren. Blessed be her memory.
She is survived by her children, Diane (Herb) Johnson of St. Augusta, MN, Patricia (Larry) Hirabayashi of Richfield, Sharon (Larry) Hansen of Cambridge; daughter-in-law, Linda Craig of Milpitas, CA; 10 grandchildren; 12 great grandchildren; many nieces and nephews.
Welcoming her to heaven are her parents, husband, Earl (1998) and a son, William (2004) and four siblings, Edwin, Virgil and Evelyne Hemker, Alma Ohmann.
A Mass of Resurrection will be held for Erma on Saturday, April 23, 2016 at 11:00 am at the Immaculate Conception Church in Osakis. Giftbearers are her children. Music by the members of the church Organ Choir. Interment is at the Calvary Cemetery with her grandchildren as pallbearers.

To order memorial trees or send flowers to the family in memory of Erma Craig, please visit our flower store.