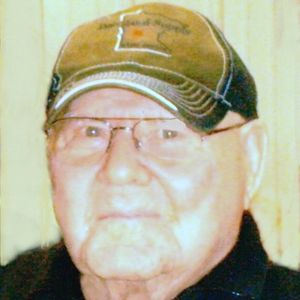 LIFE HISTORY FOR GENE WALDORF
Eugene 'Gene' Waldorf, age 87 of Osakis entered his new life on Friday, January 30, 2015 from the Community Memorial Home in Osakis with his family by his side.
Eugene Michael Waldorf was born on September 28, 1927 in Belgrade, MN, the son of John and Emma (Wuertz) Waldorf. Gene grew up while working on the family farm and attending country school. The family moved to a farm near Sauk Centre, MN in 1940. On September 8, 1953 Gene was united in marriage to Alvina Santer at the Immaculate Conception Catholic Church in Osakis, MN. Together they worked and raised a family on their dairy farm northeast of Osakis until Gene's retirement in 1999. Gene also worked on a custom combining crew.
Gene was a member of the Immaculate Conception parish, was a past Knights of Columbus member and belonged to the Gordon Community Club and the Barefoot Louie's Trail Club.
Besides farming, Gene enjoyed fishing, playing cards, auction sales, watching summer parades, going to dances and just socializing with family and friends. He enjoyed music and was known to play an occasional tune on the accordion. Later his grandchildren kept him busy and entertained and were an important part of his life.
Gene is survived by his devoted wife of 62 years, Alvina Waldorf of Osakis; his children, James (Lynette Erickson) Waldorf of Osakis, Monica Yager of Colorado, Patricia (Gerald) Nelson of Nelson, John (Nancy) Waldorf of Osakis, David (Julie) Waldorf of Osakis, Mary (Andrew) Knudson and Joseph (Jodie Baumann) Waldorf, all of Alexandria;7 grandchildren, Adam (Mary Grosz) Waldorf, Ashley (Dan) Grosz, John and Ann Yager, Brooke, Jesse and Emily Waldorf; great granddaughter, Harley Grosz; brothers, Bert (Lucille) Waldorf of Sauk Centre, Donald (Kay) Waldorf of St. Cloud; sister, Dorothy (Phil) Orth of St. Cloud; sisters-in-law, Lucille and Dolores Waldorf of Carlos and Albany; many nieces and nephews.
Waiting to greet him in Heaven are his parents, a daughter, Pamela; brothers, Roman and Raymond Waldorf; a sister and brother-in-law, Tillie and Norbert Beuning.
A Mass of Resurrection will be held for Gene on Tuesday, February 3, 2015 at 11:00 am at the Immaculate Conception Church in Osakis with Fr. David Petron officiating. Interment is at the Calvary Cemetery in Osakis with honorary pallbearers by his grandchildren and great granddaughter and the Osakis Galeon Staff and Residents. Active bearers are his sons and sons-in-law, Jim, John, Dave and Joe Waldorf, Gerald Nelson and Andrew Knudson.

To order memorial trees or send flowers to the family in memory of Eugene Waldorf, please visit our flower store.