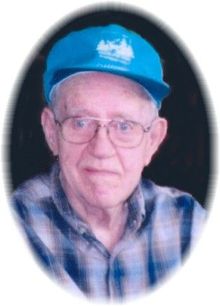 Life History for Francis Finnegan
Francis 'Frankie' Finnegan, age 92 of Osakis entered his new life on Monday, December 9, 2013 from the Community Memorial Home in Osakis where he was a resident.
On February 10, 1921 Francis Joseph was born to Thomas and Mabel (Koppin) Finnegan at the family farm in Douglas County, MN. He grew up on the farm and attended country school through the eighth grade. He was drafted into the United States Army during WWII and served his country in the Signal Corp. After serving for three years and participating in the European-African campaign, Frank was honorably discharged and returned to his home in Douglas County. He remained single all of his life, and in addition to farming, Frank worked for Douglas County doing road repairs for over thirty years, from 1950 to 1980. Frank bought a home in Osakis and lived there until health reasons required a move. He spent five years at Woodland View Care Center in rural Long Prairie before becoming a resident at the Community Memorial Home in Osakis.
He was a member of the Immaculate Conception Church in Osakis and also belonged to the Osakis VFW Post #7902.
Besides working outdoors and enjoying life in the country, Frank also liked to do yard work, play cards and was an avid reader.
He is survived by his brother and sister-in-law, Robert and Eldora Finnegan of Osakis; his nieces and nephews, Michael (Trish) Finnegan of Alexandria, Patrick (Lisa) Finnegan of Clear Lake, Diane Barklind of Osakis, Mary (Gerald) Schneider of Gwinner, ND and Sharon (Jason) Rowe of Bastrop, TX; many great nieces and nephews. He is preceded in death by his parents; a niece, Judy Soldat; two great nieces, Jeannie Steidl and Carla Finnegan; great nephew, Nathan Schneider.
A Mass of Resurrection will be held for Frank on Monday, Dec. 16, 2013 at 10:30 am at the Immaculate Conception Catholic Church in Osakis with Fr. Dave Petron officiating. Inurment is at the Calvary Cemetery in Osakis, MN.

To order memorial trees or send flowers to the family in memory of Francis Finnegan, please visit our flower store.