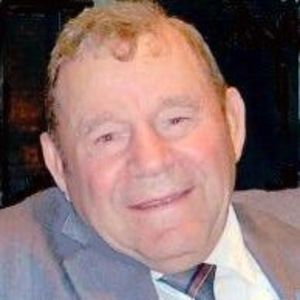 Frank Sadlovsky, age 93 of Long Prairie passed into his new life on July 20,2015 from his daughter's home in Osakis, MN.
Life History for Frank Sadlovsky
On January 13, 1922 a son was born to Gustive and Barbara (Gruber) of Freeport, MN. They named him Frank Gust Sadlovsky. He married Hazel Marie Hamlin on September 17, 1944 in Long Prairie, MN. Frank served his country during WWII. He enlisted in the Army and was a Private First Class in the 405th Infantry, Company G and assisted as a messenger and German language translator in a combat platoon. He received the Purple Heart Medal for valor, in addition to many other military medals. After his honorable discharge on May 13, 1947, Frank returned to Minnesota and farmed on the Hamlin home farm on Lake Beauty. In addition to farming, Frank worked in the refrigeration department at Swift's Meats. He also drove milk truck for the Reynold's Creamery in Gutches Grove. Never one afraid of hard work, Frank even took on area painting jobs, and no project was too large. In addition to painting many houses, he was also willing to tackle painting large barns and churches. Frank retired after a long and productive career when he was close to eighty years old. He was a member of the Long Prairie Baptist Church and both the Long Prairie VFW Post #1140 and the American Legion Post # 12.
Some of his hobbies and interests included hunting, fishing and downhill snow skiing. Frank loved to take his 4 wheeler for a ride around his property and also liked to work in the garden. During the winter months he bowled and watched Western movies. He loved Polka music and cheering on his favorite football team, the MN Vikings. Most of all however, he loved animals.
Frank is survived by his children, Ruthann Blair of Puyallup, WA, Linda Sadlovsky of Osakis, Nancy (Daniel) Drilling of Long Prairie and David Sadlovsky of West St. Paul, MN; 5 grandchildren; 9 great grandchildren; many nieces and nephews.
He is preceded in death by his parents, wife, Hazel, sisters, Esther and Emma Hoffman, Barbara Bezenek; brothers, Michael, Ernest, Herman, Ben and August Sadlovsky.
A celebration of Frank's life will be held at an Open House on Saturday, August 1, 2015 beginning at 11:00 am until 3:00 pm at the American Legion Club in Long Prairie with military honors provided by the Long Prairie VFW Post and American Legion Post Honor Guards at 12 noon. Inurnment is at the Evergreen Cemetery in Long Prairie, MN.
Arrangements by the Roy-Hetland Funeral Home in Osakis, MN.

To order memorial trees or send flowers to the family in memory of Frank Sadlovsky, please visit our flower store.