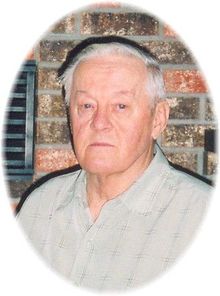 Life History for Fred Edenloff
Fred Edenloff, Jr., age 78, passed away early July 1, 2011 at the Community Memorial Home in Osakis, MN after a brief but courageous battle with an aggressive pancreatic cancer.
Fred William Edenloff was born on April 23, 1933 in Gordon Township, Todd Co., MN to Fred W. and Olive (Grover) Edenloff, Sr. He attended Dist. 17 country school and then graduated from Osakis High School with the class of 1951. He worked at the local lumberyard and then in 1953 and served in the US Army during the Korean War, being stationed in Germany. After his honorable discharge in 1955 he returned and married his sweetheart, Kathern Hensley on May 17th, 1956 in Robbinsdale, MN. While Fred worked as a tender to the brick layers building the Osakis Lutheran Church, it was then he decided that bricklaying would be his chosen profession. Fred attended St Cloud Area Vocational School from 1955-1958 for masonry and completed his apprenticeship in 1958. He would continue laying brick for 42 more years! Central MN is dotted with the many schools and hospitals Fred worked on. He was a lifetime member of the Minnesota and North Dakota Bricklayers and Allied Craftsmen Union. Fred was even an assistant masonry teacher at the Alexandria Technical College Masonry program after his retirement in 1995. In 1976, Fred and his family owned and operated the little grocery store on Main Street known as Fred's Little Store. In 1981 they moved back to "snoose valley" in rural Osakis, which was Fred's home "stomping ground." He was a member of the Osakis Lutheran Church, the New Testament Church and finally Grace Church in Alexandria.
Fred was a life-long sports fan. He followed the professional boxing and cheered for the MN Gopher football and basketball as well. He was competitive himself and enjoyed playing basketball with his kids, nieces, and nephews; ping pong tournaments with his cousins (or anyone willing to play); and doing woodworking. Fred also enjoyed nature and being outdoors, going hunting, and especially "cruising around the block" on the lake road and looking at the wildlife and lake. He always kept the bird feeders full and enjoyed watching them each season. Another activity that brought him joy was watching cartoons with his grandson Cooper. He loved his family and was a kind and loving husband, father, grandpa and brother who will be dearly missed by family and friends.
Fred is survived by his wife of 55 years, Kathy of Osakis; children, Danny (Anne) Edenloff of Alexandria, Dora (Mark) Striemer of Phoenix, AZ, Darla (Scott) Calverley of Finlayson, MN and Scotty Jon (Karla) Edenloff of Osakis; 16 grandchildren; 14 great grandchildren; his brothers, Marvin (Jean) Edenloff of Minneapolis and David (Sue) Edenloff of Circle Pines; a sister, Orpha (Gail) Sibell of Osakis; many nieces and nephews.
Preceding him in death are his parents, three grandchildren, Samuel and Sterling Striemer and Irene Kay Edenloff; brothers, Lester Orville, Charles Richard, and a sister Luella Christine Edenloff.
Funeral services will be held on Wednesday, June 6 at 11:00 am at the Osakis Lutheran Church with pastors, Ron Calvert and Peter Reishus officiating. Musicians are organist, Pat Converse and soloist, Tony Pitschka. Interment is at the Sauk Valley Cemetery with active pallbearers Jamie and Shane Edenloff, Jordan Calverley, Cooper Jon Edenloff, Josh Schoeck, Nick Hinnenkamp, Grant Striemer and Lee Edenloff. Honorary pallbearers were his grandchildren and great grandchildren. Military honors were provided by the MN Honor Guard and the Osakis VFW Post # 7902.
Blessed be his memory.

To order memorial trees or send flowers to the family in memory of Fred Edenloff, please visit our flower store.