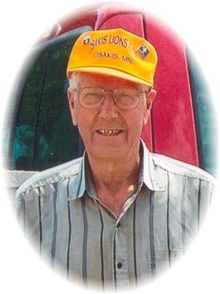 Life History for Gail Sibell
Gail Sibell, age 85 of Osakis passed away on Wednesday, Sept. 14, 2011 at the Community Memorial Home in Osakis, MN.
On July 22, 1926, Gail was born in Belle River Township, Douglas County, MN to Henry and Anna (Johnson) Sibell. He grew up and attended school in Osakis, MN. On October 10, 1948 Gail was married to Orpha Edenloff. Gail worked in the bait business for over 50 years. He and Orpha opened and operated Sibell's Bait Shop in Osakis for many years. Upon retirement, the Sibell's moved to a home in Leslie Towhship in 1981.
Gail was a member of Osakis Lutheran Church and also belonged to the Osakis Lion's Club. He loved nature and being outdoors. He was an avid fisherman and hunter who enjoyed traveling to various states to go hunting. Gail also enjoyed doing woodcutting. He and his friend, Al Halgrimson cut, split and sold over 90 cords of woods in two years, even though both men were in their mid-sixties in age.
He was a kind, hardworking husband, father, grandpa and brother who will be dearly missed by his family and many friends.
Gail is survived by wife, Orpha Sibell of Osakis; two sons, Gerald (Linda) Sibell of Hibbing, MN and Darwin (Sue) Sibell of Osakis; two grandsons, Mickey and Christopher Sibell; 4 great grandchildren; two brothers, Herbert (Audrey) Sibell of Minneapolis and Alvin Sibell of Stockton, CA; several nieces and nephews.
He is preceded in death by his parents, Henry and Anna Sibell and his brothers, Raymond, Harvey, Virgil and Rudy Sibell.
Funeral services for Gail were held on Friday, September 16, 2011 at 1:30 pm at the Osakis Lutheran Church with Rev. Ron Calvert officiating. Musicians were organist, Pat Converse and soloist, Darlene Hendricks. Interment was at the Pleasant Mound Cemetery in rural Carlos, MN. Honorary pallbearers were the members of the Osakis Lion's Club. Active bearers were Roy Juntunen, Ray Gabler, Randy Abers, Don Peterson, Darrell Schultz and Glen Sibell.

To order memorial trees or send flowers to the family in memory of Gail Sibell, please visit our flower store.