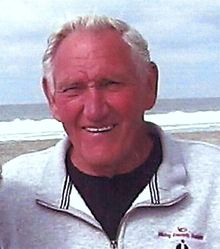 Gary Hennings, age 70 of Osakis died unexpectedly on Tuesday, June 14, 2011 while vacationing near International Falls, MN.
Gary William Hennings was born on August 3, 1940 in Osakis, MN to Carroll and Clara (McCellan) Hennings. He graduated from Osakis High School with the class of 1958. He then enlisted in the U.S. Air Force on October 10, 1958 and was stationed in Vandenburg Air Force Base in California. When he was honorably discharged in 1964, he had his master's license as an electrician. Through his work Gary traveled much of the country, including the states of AL, KS, VA, KY, AR, CA, IA and MN. On April 6, 1968 he was married to Maxine Bowman in Reno, Nevada. They lived several years in Modesto, CA and then returned to live first in Parkers Prairie, MN and finally in Osakis, MN.
Gary was a member of the NAIFC (North American Ice Fishing Circuit) and the Ducks Unlimited. Besides fishing and hunting, he also enjoyed traveling, camping and playing cards. He was the happiest when surrounded by his family and able to be out cooking steaks on the grill. He was a loving father, grandpa and brother who will be deeply missed by his family and friends.
He is survived by his children, Randy Hendershot of Vining, Terry (Nancy) Hendershot of Eagle Bend, Sherri (Rowdy) Rupert of Osakis, Shawn (Becki) Hennings of Tea, South Dakota, Renee Hennings of Canton, IA; a son-in-law, Bruce Moller; special friend and companion, Mary Gillespie of Osakis; many grandchildren and great grandchildren; siblings, Mona (Gerald) Goolsby of Modesto, CA, Alan (Sharron) Hennings of Ashville, AL, Gail (Gary) King of Yorktown, VA; many nieces and nephews.
He is preceded in death by his parents, wife, Maxine in 2003, daughter, Kim Moller and a granddaughter, Sabrina Hennings.
Funeral services for Gary will be held on Tuesday, June 21, 2011 at 11:00 am at the First Presbyterian Church in Osakis with Rev. Tim Sutton officiating and readings by Pastor Lois Burkart. Casketbearers are Rowdy Rupert, Scott & Shannon Starry, Tom Enmark and Jon Barland, Matt Hjelm and Russell Elliott. Interment is at the Hudson Cemetery in Hudson Twsp, Douglas Co., MN. Military honors are provided by the Osakis VFW Post #7902 Honor Guard.

To order memorial trees or send flowers to the family in memory of Gary Hennings, please visit our flower store.