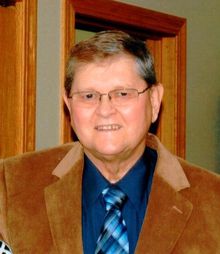 Gary Leagjeld, age 73, of Long Prairie entered into the peace of Heaven on Saturday, November 8, 2014 from the CentraCare facility in Long Prairie, MN.
On May 14, 1941 in Iona Township, Todd County, MN a baby boy was born to Louis and Eva (Parker) Leagjeld. They named him Gary Wayne. When he was a teenager, Gary was baptized and confirmed at Our Savior's Lutheran Church in Clarissa. With the class of 1961, he graduated from the Long Prairie High School. As a young man Gary worked on the family farm for his mother, but also did road construction and roofing. On September 19, 1964, Gary was united in marriage to Dianne Zabel at the Long Prairie United Methodist Church. For thirty-five years, Gary worked as a pressman for Hart Press in Long Prairie, retiring in 2001. During those years, he also managed to crop farm and raise beef cattle. He was a member of the American Lutheran Church in Long Prairie.
Gary had many interests and hobbies, but he was the best at being a wonderful grandfather to his four grandchildren. He loved to help people and would often do snow-plowing or hay baling to give his neighbors and friends a hand. He was a natural caregiver and found great reward in helping others in need. He enjoyed antiques, his beautiful landscaped yard and traveling. Gary loved to go camping up north with his friends. Gary also liked to go deer hunting each year and spent many hours in his shop restoring old tractors.
Left to mourn his passing is his loving wife of 50 years, Dianne Leagjeld of Long Prairie; a daughter, Paula (Bruce) Braaten of Winona and a son, Jason (Cari) Leagjeld of Burnsville; 4 grandchildren, Anneliese and Anders Braaten and Parker and Paige Leagjeld; his siblings, Ted (Sue) Leagjeld of Pequot Lakes, Louie (Joanne) Leagjeld of St. Peter, David (Carol) Leagjeld of Long Prairie, Phyllis Opgaard of Tacoma, WA, Karen Ward of Clarissa and Diane (Gary) Zastrow of Long Prairie; many nieces and nephews.
He is preceded in death by his parents, his brothers, Glen, Hollie and Donovan Leagjeld and his sisters, Oma Heubach, Shirley Pederson and Bonnie Skillings.
A celebration of Gary's life will be held on Friday, November 14, 2014 at 11:00 am at the American Lutheran Church in Long Prairie with Rev. Bill Bakewitz officiating. Organist is Ruth Zinter and soloist, Kristi DeSaro. Special music will be performed by Anneliese and Paula Braaten. Inurnment is at the Pleasant Valley Cemetery in Clotho, MN. The urn bearer is Wally Brever.
To view a video tribute to Gary just below:
http://www.jeannewilberproductions.com/p614013859/h263346eb#h263346eb

To order memorial trees or send flowers to the family in memory of Gary Leagjeld, please visit our flower store.