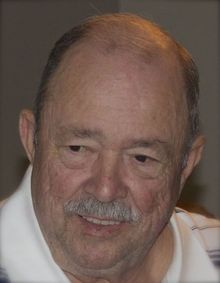 Life History for George Deemer
George Deemer, age 75 of Osakis formerly of Superior, WI passed away on Monday, Aug. 19 at the St. Cloud Hospital in St. Cloud, MN.
George was born on January 24, 1938 to George Victor and Lillian (Ostrom) Deemer. He graduated from Superior East High School and then attended Wisconsin State College in Superior. George then served his country in the US Army. He was married to Dianne DeVoy on May 23, 1964 in Minneapolis at St. Stephen's Catholic Church. They lived in Superior and owned the 'Big D' drive-in restaurant. George then went back to school, attending a Master's program in Human Resources at the University in Vermillion, SD. The Deemer's lived in the Twin Cities for many years while George was employed for several companies in their Human Resources departments. In 1998 they retired to a home on Lake Osakis.
George had many interests and hobbies including fishing, dancing, golfing and container gardening. One of his favorite past times was enjoying the birds that frequented his many bird feeders. He loved people and socializing and especially enjoyed spoiling his grandchildren.
George is survived by his daughter and son-in-law, Lisa & Steve Mix of Sioux Falls, SD and a son and daughter-in-law, David and Kelly Deemer of Carver, MN; 2 grandchildren, Michelle and Ryan Mix. He is preceded in death by his parents, his wife Dianne in April of 2009 and a sister, Mary Jean Murphy.
Services for George are Saturday, August 24, 2013 at 12:30 pm at the Immaculate Conception Church in Osakis with Fr. David Petron officiating. Inurnment is at the Gordon Pleasant Hill Cemetery in rural Osakis.
Arrangements were handled by the Roy-Hetland Funeral Home in Osakis, MN.

To order memorial trees or send flowers to the family in memory of George Deemer, please visit our flower store.