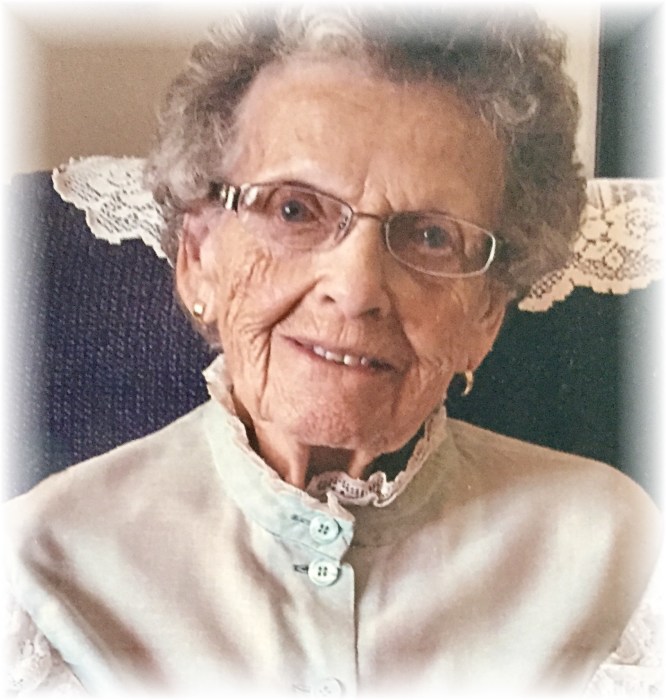 Geri was born in Fergus Falls, MN on Independence Day, July 4 in the year 1917.  She was one of two daughters born to James and Ellen (Sprague) Dowell.  She attended school and then studied to be a beautician in Minneapolis.  She worked for several years in Harmony, MN.  Geri then married the love of her life, Howard Irwin on March 7, 1938 in Backus, MN.  They moved to the Osakis area and farmed and raised their children.  After Howard’s death in 1979, Geri continued to farm for another twelve years before moving into Long Prairie, MN, living at the Eldred’s Country Club Apartments for 14 years until moving to the Prairie View Apartments in 1993.  Health concerns required a move to the Galeon in Osakis, MN her last years.

Geri was a natural at making friends.  She loved to visit with her clients and had a gift for making people feel they were special.  She had a coffee shop at the farm and in the Apartments where people could come to visit and laugh their cares away.  She was an excellent cook and always had some baked goods to share with friends and family who stopped for a visit.  She played cards, went dancing, traveling and worked in her garden.  She was a devoted Twins and Vikings fan and also liked to read and crochet.  While raising her kids she was also active in the local 4 H group.  Geri belonged to the Leslie Community Church and belonged to the Ladies Aid.

Funeral services will held on Wednesday, May 29, 2019 at 11:00 am at the First Presbyterian Church in Osakis with Rev. Kali Christensen and Rev. James Brown as celebrants.  Musicians are organist,                 and soloist, Dana Hetland.  Interment is at the Gordon Pleasant Hill Cemetery in Osakis with casketbearers Michael, Steven, Cody and Brandie Irwin, Krystal Weiss and Bill Lunceford.  A luncheon will be served in the church fellowship hall.

To order memorial trees or send flowers to the family in memory of Geraldine Irwin, please visit our flower store.