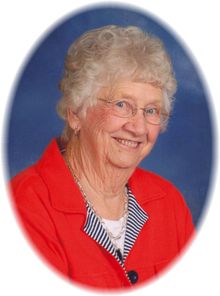 Life History for Gladys Drexler
Gladys Drexler, age 93 of Nelson, passed peacefully into her new life on Sunday evening, February 10, 2013 at the Community Memorial Home in Osakis, MN.
On June 26, 1919 a baby girl was born to Edward and Marie (Christopherson) Granlund at their home in Belle River Township, Douglas County, MN. She graduated from Alexandria High School in 1938 and worked for a time doing retail sales. On June 18, 1942 Gladys was united in marriage to Harvey Drexler at the St. Nicholas Catholic Church in Belle River. They farmed for many years in Belle River Township, finally selling their dairy herd in the 1970's. From 1968 to 1985 Gladys also worked as a cook at the Carlos Elementary School. For over 17 years she helped make wholesome school lunches that satisfied many hungry appetites. Over the years she also raised chickens and sold eggs. She was a member of St. Nicholas Church in Belle River and served in many ways, including on the church council, as a member of the St. Ann's Sodality and also as past president of the Ladies Guild.
Gladys had many various interests and talents. She loved her flower and vegetable gardens and had a knack for growing things. Her home was always decorated with the many beautiful flowers she'd grow each season. Another of her talents was doing crafts such as embroidery and other needlework. Many projects were completed each winter to be given as gifts to lucky family members and friends. Other hobbies such as bowling, square dancing and playing cards (especially Whist) with her Miltona card club also kept her busy. In her retirement years Gladys enjoyed travelling and taking in area social events with a local Red Hat club. She was a loving mother, grandma and great grandma who will be dearly missed by her family and friends. Blessed be her memory.
She is survived by her sons, Joe (Beth) Drexler of Hastings, MN and Doug Drexler of Park City, UT; 4 grandchildren, Lori (John) Springer, Eric (Kathy) Drexler, Amy Bates and Mya Drexler; 7 great grandchildren, Riley & Rory Bates, Emma, Ella and Annie Springer, Samuel & Grace Drexler; many nieces and nephews.
Preceding her in death are her parents, husband, Harvey (1995) and a granddaughter, Kimberly Drexler; brothers, Forest and Gordon Granlund and a sister, Effie Granlund.
A Mass of Resurrection will be held for Gladys on Saturday, February 16 at 11 am at St. Nicholas Catholic Church in Belle River with Fr. Dave Petron officiating. Honorary pallbearers are her grandchildren, Lori Springer, Amy Bates, Eric and Mya Drexler and the Red Hats Club members. Active pallbearers are Gary Botzet, Mike Hauer, Gail Landeen, Tom Toenjes, Brian Doucette and Ken Olson.
Arrangements by the Roy-Hetland Funeral Home in Osakis, MN.

To order memorial trees or send flowers to the family in memory of Gladys Drexler, please visit our flower store.