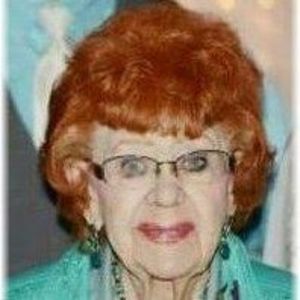 Gladys Grove, age 102, well known musically as the "Prairie Sweetheart" passed away peacefully on Thursday, April 7 at the Galeon in Osakis, MN where she was a resident. Memorial services will be held for Gladys on Friday, April 15, 2016 at 2:00 pm at the Osakis Lutheran Church with Rev. Jim Walburg officiating. Inurnment is at the Lakeside Cemetery in Osakis. Visitation begins at 12 Noon, two hours prior to the service at the Osakis Lutheran Church on Friday, April 15th. Arrangements by Roy-Hetland Funeral Home
Life History for Gladys
On April 29, 1913 a baby girl was born to Palmer and Lillie (Coons) Olson in Osakis, MN. They named her Gladys Lenore and she was one of a family of five children. Gladys attended country school near Nelson, MN until moving with her family to live in Alberta, Canada. There she met and married Warren Everett Stimson on October 26, 1931 in Wainwright, Alberta. They returned to Minnesota and lived in Osakis raising four children. Throughout her many years she also lived in Staples, Hoffman and Sauk Centre. For several years Gladys worked as a bartender at the Tic Toc Bar in Sauk Centre and then at Sidewalks in West Union, MN. On September 20, 1969 Gladys was married to Elwood Grove in Osakis, MN. For years Gladys and her sister Lorraine had a band known as the Prairie Sweethearts. Gladys sang and played accordion with Lorraine on guitar. They performed all over the Midwest at dance halls in North Dakota, South Dakota and Minnesota. They even opened for Gene Autry and did concerts at the Paramont Theatre in St. Cloud in addition to performing on a Wadena radio program. Music was an integral part of her life and brought her many friends and memories. Due to her longevity, Gladys was proud at the age of 101 to be able to pose for a six generation photo with her daughter and granddaughters that was published in local papers. That same year she was also named 'Prom Queen' at the Galeon. Gladys was a member of the Redeemer Lutheran Church in Osakis, MN.
Gladys had many interests and was so proud of her ninety-plus years of accordion playing. She was a natural 'people person' who enjoyed visiting and sharing stories with whomever she met. She was faithful about keeping a daily journal to record her many adventures. She loved to travel and went to area dances and also enjoyed playing in weekly card clubs. In the summers Gladys liked working out in her flower garden and enjoyed the birds and animals.
She is survived by her husband, Elwood Grove of Osakis; children, Audrey Douvier of Sauk Centre, Gerald (Jackie) Stimson of Fort Wayne, IN, Janetta (Freelyn) Wenzel of Parkers Prairie; daughter-in-law, Bernie Stimson of Stillwater; 14 grandchildren and many great, great grandchildren and great, great, great grandchildren; a brother, Virden (Mary Mae) Olson and a sister, Myrtle Judes, all of Sauk Centre; many nieces and nephews.
Preceding her in death are her parents, her first husband, Warren Everett Stimson; a son, Warren Wayne Stimson; son-in-law, Harold Douvier; sisters, Geraldine Olson and Lorraine McQuery.
Memorial services for Gladys will be held on Friday, April 15, 2016 at 2:00 pm at the Osakis Lutheran Church in Osakis, MN with Rev. Jim Walburg officiating. Inurnment is at the Lakeside Cemetery in Osakis with bearers Laurie Borgerding, Pam Lyons, Erik Wenzel and Lisa Michael.

To order memorial trees or send flowers to the family in memory of Gladys Grove, please visit our flower store.