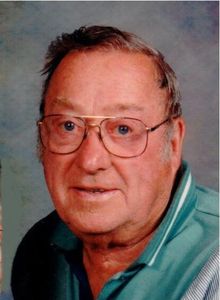 LIFE HISTORY GLEN BARBER
Glen Barber, age 84 of Osakis passed into his new life early Wednesday morning, Oct. 15, 2014 from the Community Memorial Home in Osakis, MN.
Glen was born on November 3, 1929 to Marvin and Mabel (Maus) Barber in Osakis, MN. He served his country during the Korean War in the U S Army. On June 29, 1956 he was united in marriage to Lorraine Esther Timm in Garfield, MN. They moved to Minneapolis in the early '60's and Glen went to work at a tractor manufacturing company known as Minneapolis-Moline in their parts department. When the opportunity arose to work for the Edina Public Schools, Glen took a job there driving school bus and doing maintenance. He took great pride in his work and spent many long hours at the school. When he retired in 1997, he and Lorraine moved back to the Osakis area. After all those years driving bus through the tough Minnesota winters, Glen especially enjoyed being able to spend over twenty years wintering in Arizona. Some of his favorite hobbies included fishing, hunting and playing cards. Many will remember Glen for his great sense of humor. He was also known for his practical joking, especially when it came to picking on his family and friends.
Glen was a member of the Osakis Lutheran Church and the Osakis VFW Post #7902.
Left to mourn his passing are his daughters, Judy Molm of Richfield, MN and Jean (Les) Feigum of Nelson, MN; four grandchildren, Matthew (Angela) Feigum, Benjamin (Jen) Feigum, Tracy (fiance, Chris Cowles) Molm and Katie (Zack Swigart) Molm; 4 great grandchildren, Jason and William Feigum, Aubrey and Easton Feigum; his sisters, Donna (Harlan) Anderson of Plymouth, Dodi (Bob) Elmquist of Edina; many nieces and nephews.
Preceding him in death are his parents and his wife, Lorraine on July 31, 2005.
Memorial services will be held for Glen on Saturday, Oct. 18 at 10:30 am at the Osakis Lutheran Church with Rev. Don Reisig officiating. Musicians are organist, Vicki Hinrichs and soloist, Dana Hetland. Honorary pallbearers are the members of the Osakis VFW Post Honor Guard and both his grand and great grandchildren. Inurnment is at the MN State Veterans Cemetery in Little Falls, MN.
Arrangements by the Roy-Hetland Funeral Home in Osakis, MN.

To order memorial trees or send flowers to the family in memory of Glen Barber, please visit our flower store.